We most certainly got a very noisy display of fireworks after the U.S. election results came in! The following chart updates the one we last showed after the market close on 7 November 2016, the day before the election.... 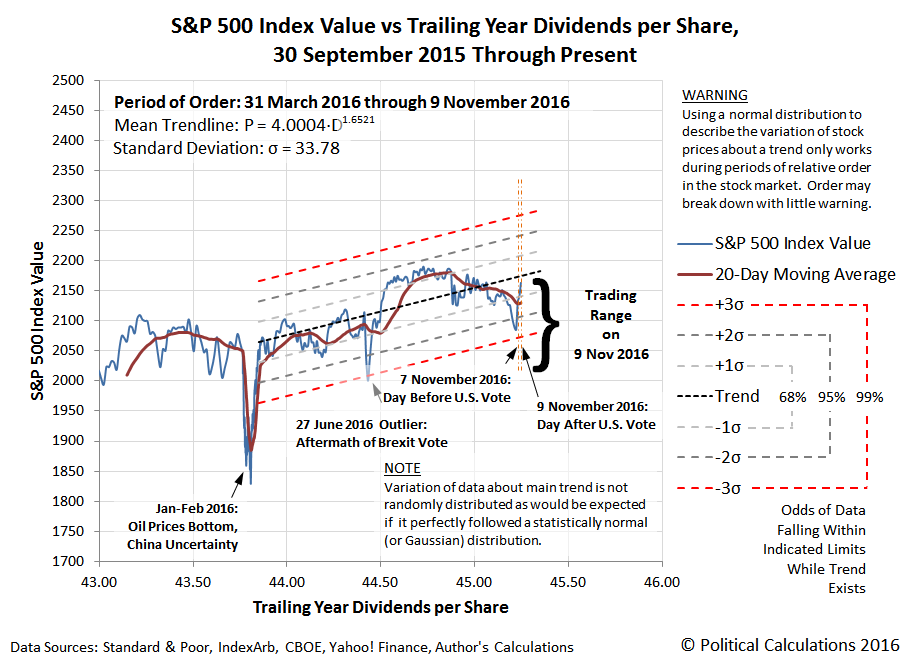 Unfortunately, they were mostly the kind of fireworks that you could only see at night, where virtually all of the negative reaction occurred in the overnight futures markets, which created some really powerful buying opportunities as the election losers in the market threw a tantrum as the election outcome became known.

Here are the day's major market-reaction headlines to take you a 150 point swing in the value of the S&P 500:

Why did stock prices boom instead of bust? Economist Scott Sumner paid close attention to the news of which stocks did best in the post-election rally and came up with a hypothesis for why the election's outcome would have mattered so much to the firms behind the day's biggest gains in stock prices.

It seems like a “growth reaction” to me, at least after the initial decline. Investors now expect faster economic growth. Why more growth? It might be tax reform. It might be infrastructure (although monetary offset applies there.) But one thing I heard a lot today (on CNBC) was deregulation. Private prison stocks soared. Coal stocks rose. Bank stocks rose. Biotech soared. Many of these are clearly related to regulation. We often forget how many regs the Obama administration had imposed, and Hillary was promising still more (her talk of drug price controls had been crushing biotech.) Probably small business readers are thinking, “you forgot, I didn’t”.

On a final note, we're not kidding in describing Paul Krugman's words as "now immortal". Much as Irving Fisher was his day's most publicly notable economist, Krugman is most certainly today's. Irving Fisher's immortal quote about stock prices, which he spoke in the days immediately before the Black Friday Stock Market Crash that is considered by many to be the inaugural event of the Great Depression, is:

Stock prices have reached what looks like a permanently high plateau. I do not feel there will be soon if ever a 50 or 60 point break from present levels, such as they have predicted. I expect to see the stock market a good deal higher within a few months.

Markets are different today than they were in 1929. They don't wait anywhere near as long to prove the pronouncements of otherwise brilliant economists to be wrong. It's a big part of what makes them so fascinating to observe!