In the first full week of December 2016, the S&P 500 once again behaved pretty much as expected in running to the high side of our standard model's forecast range.

But that's about to come to an end, because we're now on the back side of the echo of a small burst of historic volatility from late 2015 that skewed our standard model's projections of future stock prices downward over the previous two weeks, thanks to our use of historic stock prices in its projections.

With that echo of past volatility now in the rear view mirror, we anticipate that the apparent trajectory of stock prices will be more closely aligned with our standard model's alternative future projections, where coming out of Week 1 of December 2016, investors would appear to be focused on 2017-Q2. 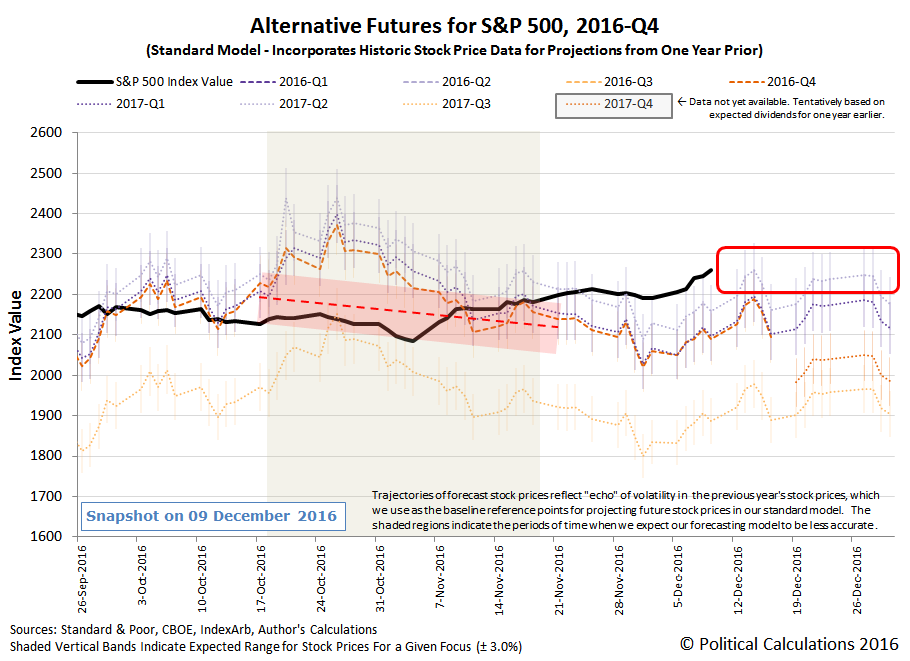 In the chart above, we've emphasized that the level of the S&P 500 going into Week 2 of December 2016 is already largely consistent with investors being focused on 2017-Q2 with the red box shown through the end of December 2016, which we sketched only for the purpose of illustrating where the level of the S&P 500 is likely to be found while that state of affairs continues.

At least, in the absence of a new volatile noise event or a more fundamental change in the expectations for the S&P 500, which if they were to occur, would very likely be documented in the news headlines.

Which is why we make such a point to document the main headlines that are the most significant for the S&P 500 each week! The headlines that mattered most in Week 1 of December 2016 are listed below....

Elsewhere, the week's economic positives and negatives were noted by Barry Ritholtz in his weekly summary.