In Week 3 of February 2017, we closed out our five-week long prediction of the range into which the S&P 500 would close on each trading day from 5 January 2017 through 14 February 2017. The final results are presented in the following chart. 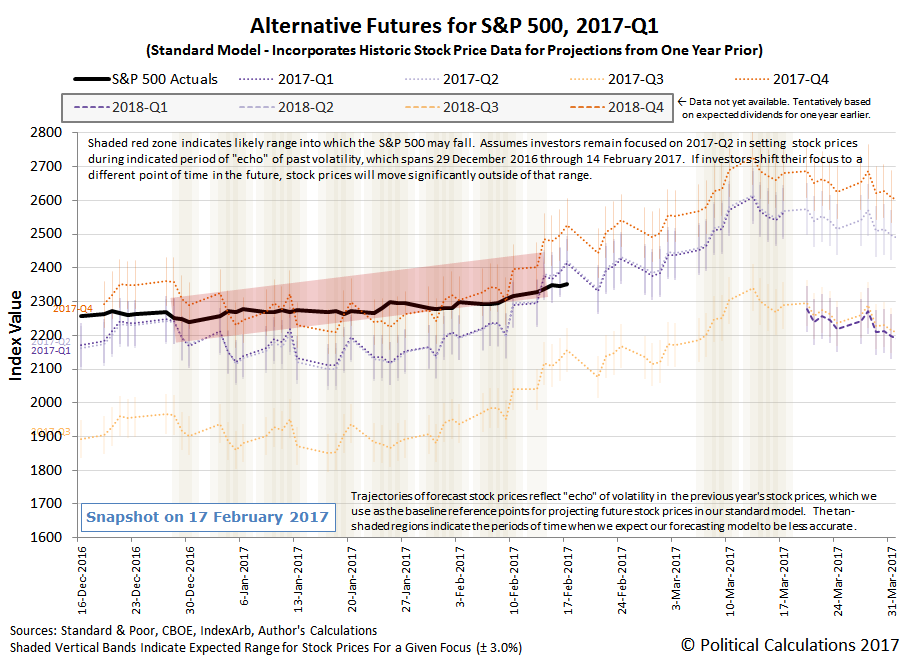 This is second time that we've attempted the feat with our "connect the dots" approach for coping with the periods where we know in advance that the accuracy of our standard forecasting model will be negatively impacted by the echo effect of past volatility, which arises as a result of our model's use of historic stock prices as the base reference points from which we project future stock prices. As with that previous attempt, stock prices generally fell within our specifically projected range (actually, this time they all fell entirely within the predicted range, whereas back in 2016-Q4, they dropped just outside our projected range on two trading days during that previous prediction period).

It will be another couple of week's before the echoes of past volatility will once again prompt us to attempt another override prediction, but until then, our standard model's forecast will stand - to read that forecast in the chart above, you just need to determine how far forward in time investors are looking as they go about making their current day investment decisions, then identify the range that coincides with that point on the investment horizon.

As best as we can tell right now, they're focusing on either 2017-Q1 or 2017-Q2, for which our dividend futures-based forecasting model doesn't make much distinction. That observation is based in part on the market-driving news headlines that came out during Week 3 of February 2017.

The Big Picture's Barry Ritholtz spelled out the pluses and minuses in the news for the U.S. economy in the trading week ending on Friday, 17 February 2017.