The national dividend is an alternative way to measure of the economic well being of a nation's people. Originally conceived by Irving Fisher back in 1906, it was one of three concepts that were proposed for that purpose, where the two competing proposals were subsequently developed over the following decades into what we know today as Gross Domestic Product.

Irving Fisher's concept fell by the wayside because of the difficulty in collecting the data on the goods and services consumed by American households needed to make it into an effective real-time measurement of their consumption. It wasn't until the 1980s that the Census Bureau began regularly collecting consumption data for U.S. households, and then it wasn't until 2015 that we realized that we could make Fisher's concept of a consumption-based measure of the economic well-being of American households a reality.

With that introduction now out of the way, we can now update the U.S.' national dividend through the end of 2016. 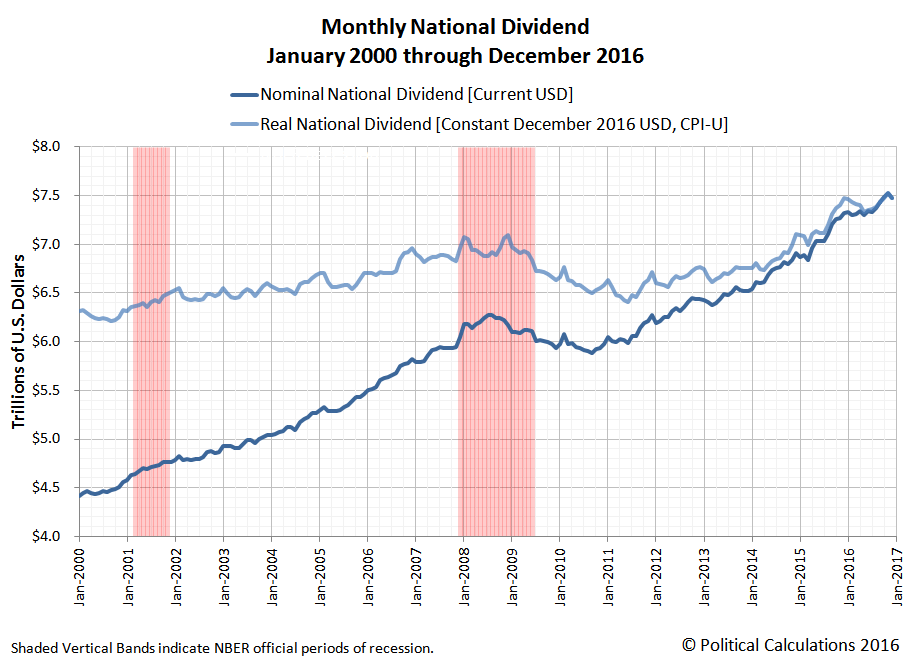 In 2016, we see that in nominal terms, the national dividend was flat for the first six months of the year, which then ticked up through November 2016 to reach its peak of just above $7.5 trillion, before turning back down again in December 2016.

But after adjusting for inflation, we see that 2016 was a rough one for American households, as their well-being declined from January 2016 through the middle of the year, before beginning to recover with the final outcome of being collectively no better off at the end of the year than they were at the beginning.

All that is a big reason why we now have a President Trump instead of another President Clinton. Politicians would benefit by paying more attention to the measure of the national dividend than they do to GDP.

Sentier Research. Household Income Trends: December 2016. [PDF Document]. 2 February 2017. [Note: We have converted all the older inflation-adjusted values presented in this source to be in terms of their original, nominal values (a.k.a. "current U.S. dollars") for use in approximating the national dividend.]