In January 2017, the trailing year average of the year-over-year change in atmospheric CO2 concentrations peaked at 3.47 parts per million, representing the fastest rate at which carbon dioxide was added to the Earth's atmosphere since Janauary 1960. Since then, that rate of change has fallen to 3.28 parts per million for data reported by the Mauna Loa Observatory through March 2017.

The chart shows that change, along with how that correlates with periods where human activities provide some explanation for the rate at which the concentration of carbon dioxide in the Earth's air changes. 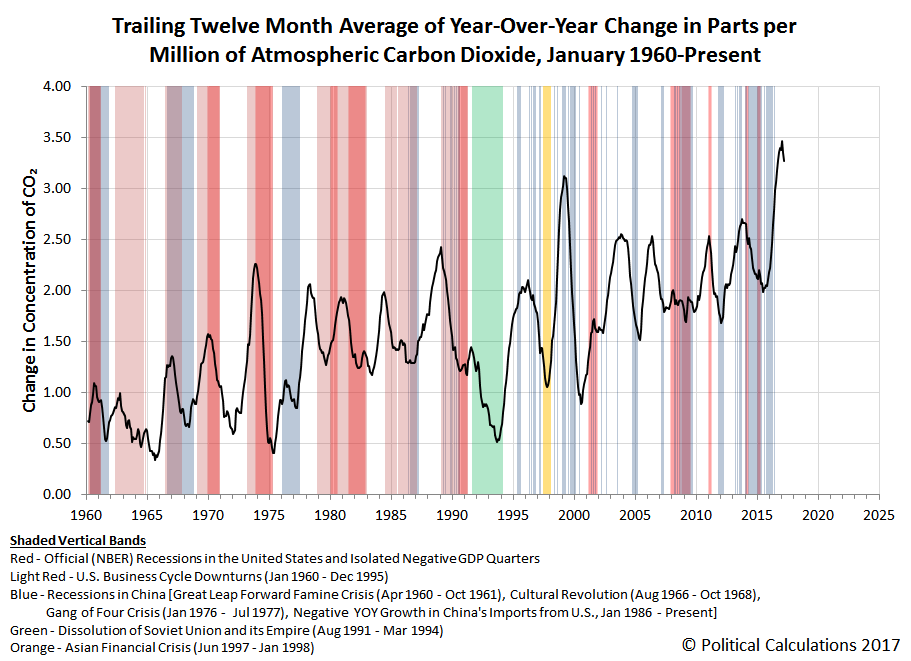 Normally, when the year over year change in the concentration of atmospheric carbon dioxide falls, it represents a negative turning point for the Earth's economy.

In this case however, it represents a more positive development: the dissipation of additional carbon dioxide that was put into the Earth's atmosphere by widespread wildfires in Indonesia back in 2015.

That additional contribution peaked in the Mauna Loa Observatory's measurements of atmospheric CO2 concentration back in April 2016, so we should see a more rapid dropoff in the trailing year average for this data beginning next month. The decline will be similar to that observed in 1999 following 1997's larger Indonesian wildfires. The two events are connected by having occurred in especially strong El Niño years, which created conditions conducive to the outbreak of wildfires in Indonsesia. That's something that can then produce an outsized effect with respect to atmospheric CO2 levels because of that region's large deposits of carbon-rich peat.

We should also note that the interpolated CO2 concentration data that provides the raw data for the trailing twelve month average values presented in the chart above has gone through a substantial revision, where most of the previously reported data for the period between May 1974 and December 2014 was modified sometime between 22 December 2016 and 5 April 2017. 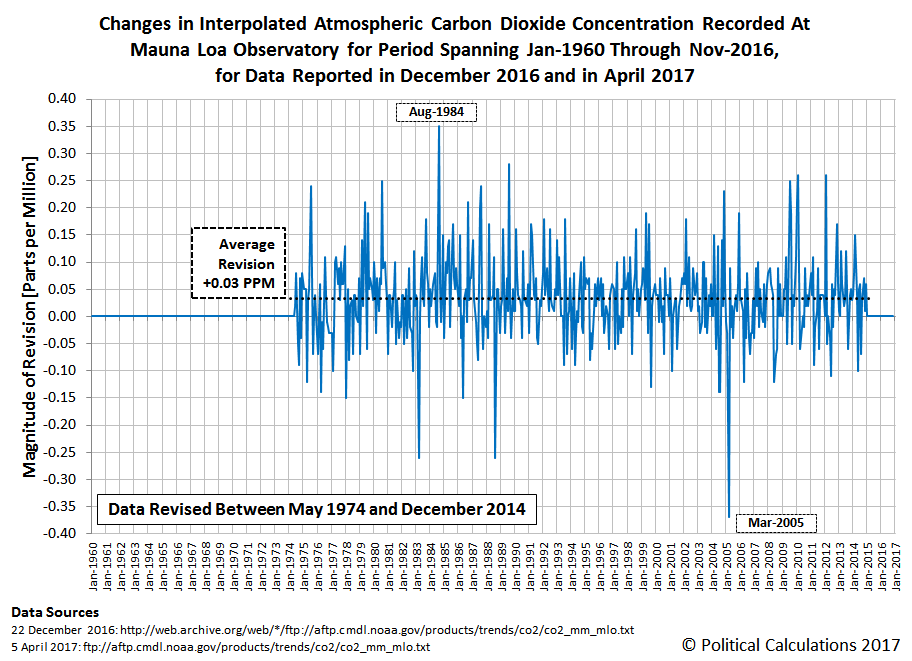 NOTE: In general, the data presented for the last year are subject to change, depending on recalibration of the reference gas mixtures used, and other quality control procedures. Occasionally, earlier years may also be changed for the same reasons. Usually these changes are minor.

The average revision was an increase of 0.03 parts per million, where the largest revision were over 10 times that amount, with the largest upward revision of +0.35 ppm for August 1984 and the largest downward revision of -0.37 ppm for March 2005. We were surprised to see that data going back over 40 years had been revised during the last several months.