The fifth and final week of March 2017 ended on an upnote for the S&P 500, at least compared to where it closed out the fourth week of March 2017, which we attribute to the week's positive news events for the U.S.' markets and economy.

We think that positive news directed investors to focus their forward-looking attention on 2017-Q2 as the most likely timing of the U.S. Federal Reserve's next hike in short term interest rates, thanks in good measure to multiple public statements by Fed officials indicating their willingness to do so throughout the week.

The following chart shows how the S&P 500 closed out the first quarter of 2017 against the backdrop of where our dividend futures-based model would place stock prices given how strongly focused they might be on any particular future quarter at any point of time throughout the quarter. 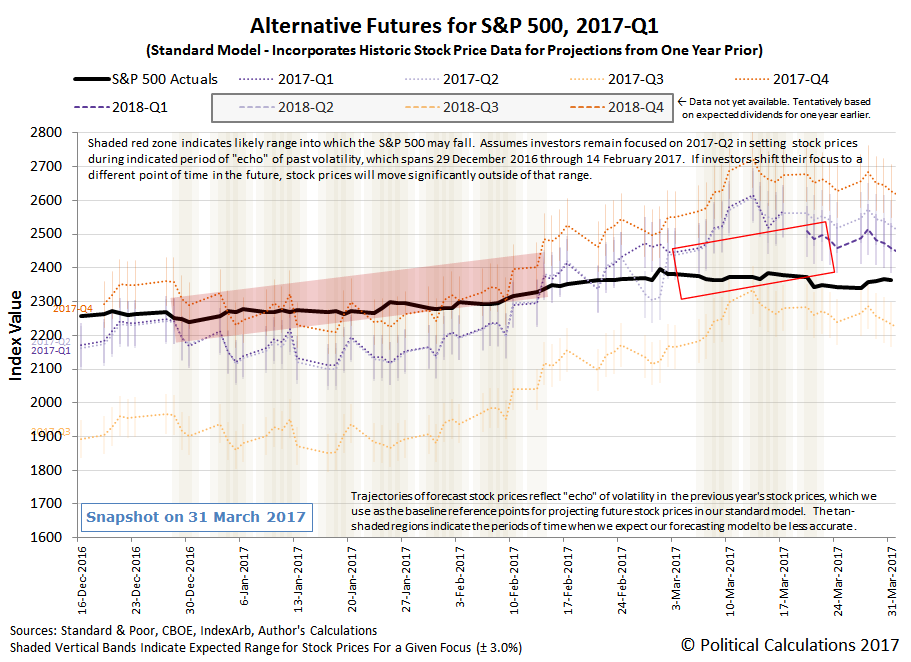 Overall, our model performed well in anticipating where the S&P 500 would go for much of the quarter, even during the periods where we used our "connect-the-dots" method to account for the effect of the "echo" of past volatility on the accuracy of its projections, which arises as a direct result of the model's use of historic stock prices as the base reference points from which it project the alternative future trajectories that the S&P 500 based on how far into the future investors are looking ahead.

The exception to that however came on 21 March 2017, when investors suddenly shifted more of their attention toward 2017-Q3 as poor economic news led more investors to speculate that the timing of the next Fed rate hike might be pushed back to 2017-Q3.

The quarter ended with investors splitting their forward-looking focus between 2017-Q2 and 2017-Q3, where as of 31 March 2017, we would say that stock market investors are slightly favoring 2017-Q3 (55%) as the quarter in which the Fed would next hike U.S. interest rates. 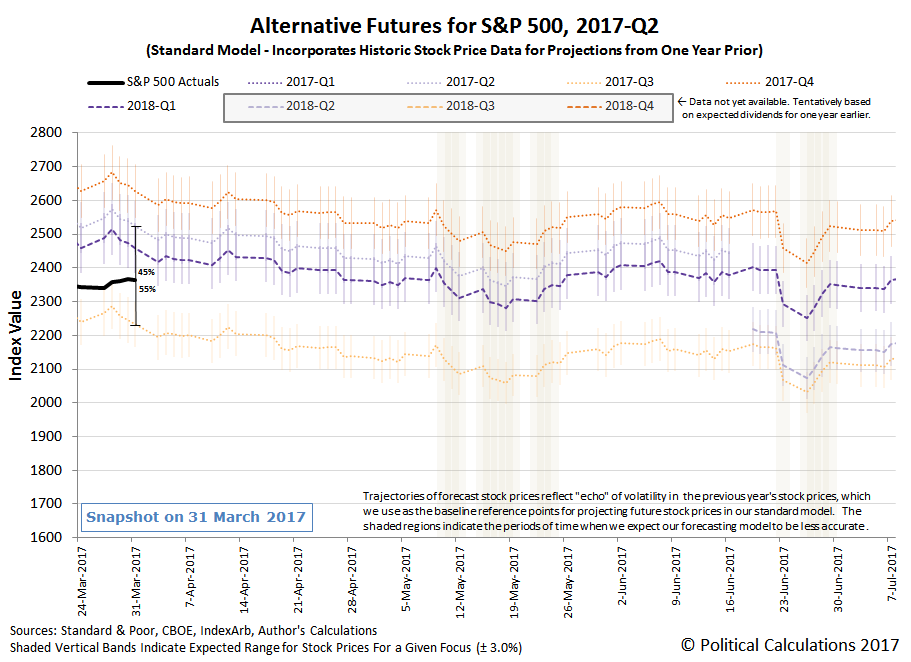 2017-Q2 looks significantly cleaner than 2017-Q1 with respect to the echo effect from past stock price volatility. However, the alternative trajectories projected by our model suggest an overall downtrend through the middle of the quarter, after which, the trajectories would be likely to flatten out through the end of the quarter.

However, what we see for those overall trends may be a moot observation. With such a large vertical distance between the alternative trajectories that the S&P 500 might take if investors were to more closely focus on either 2017-Q2 or 2017-Q3, conditions will be ripe for considerable volatility to take place in U.S. stock prices during the quarter. We think that volatility factor will have a lot more sway over the actual trajectory of stock prices during the quarter - at least until sufficient news comes out to more strongly prompt investors to focus their attention on just one future quarter.

That difference will make 2017-Q2 very different from either 2016-Q4 or 2017-Q1, where investors were often focused on either 2017-Q1 or 2017-Q2, and which had virtually no difference in the expectations for the change in the year-over-year growth rate if dividends per share between them, which proved to be a recipe for record low levels of volatility in U.S. stock prices. At least, all the way up until 21 March 2017, when investors first glanced toward 2017-Q3, finally breaking our weeks-long run for reasonably predicting the course of the S&P 500's actual trajectory.

It is possible that investors might focus their attention upon other future quarters such as 2017-Q4 and 2018-Q1, but we think that's unlikely until the Fed firmly commits to the timing of its next rate hikes.

That question asked, here are the headlines that we considered to be significant for their market-moving potential during Week 5 of March 2017.

Meanwhile, award-winning Barry Ritholtz categorizes the week's positives and negatives for the U.S. economy and markets at The Big Picture. (Congratulations to Barry and the Ritholtz Wealth Management team!)