As a general rule, and as it happens, one backed up by statistics, we don't often get very excited about single day moves in the S&P 500 unless the value of the index changes by more than two percent of its previous day's closing value. We're making an exception for Wednesday, 17 May 2017, because we get to once again demonstrate how stock prices really work.

Let's revisit the stage we began setting in earnest just one week ago, which we described in greater detail earlier this week. We've emphasized the key takeaways in the following text.

In Week 1 of May 2017, the probability that investors expecting the Federal Reserve to next hike U.S. short term interest rates before the end of 2017-Q2 reached 90%. As a result of that strong focus by investors upon the current quarter of 2017-Q2, the S&P 500 (Index: INX) has developed a real potential to experience the "ticking clock" problem.

The potential for a problem as a consequence of that shift in focus arises because of the expectations associated with the next period of time in the future to which investors might next collectively target their attention. If those expectations include an acceleration in the rate of growth of the index' dividends per share, then the shift in attention will drive an increase in stock prices, which would not be considered to be much of a problem.

If however those expectations include a deceleration (or negative acceleration) of the expected growth rate for the S&P 500's dividends per share, then the shift in attention will drive a decrease in stock prices. How much they might potentially move would then be a factor of the magnitude of the difference in those future expectations between the quarter they are currently focused upon and the quarter to which they set their attention to next.

Our dividend futures-based model for projecting the alternative future trajectories for the S&P 500 allows us to show how stock prices will likely be set as investors might focus their attention on specific points of time in the near future. 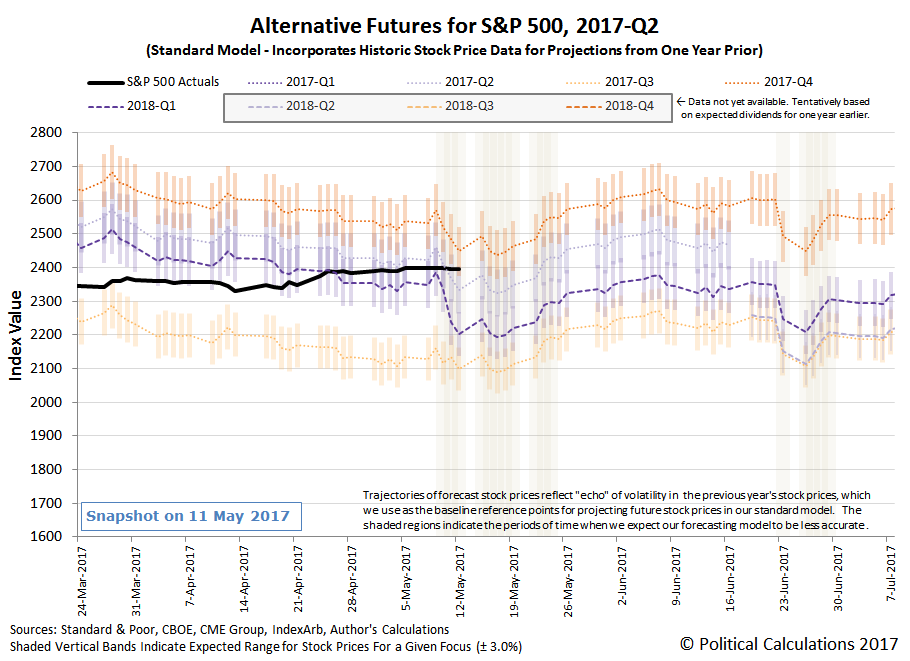 If investors shift their attention to focus upon 2017-Q3, say because Fed officials begin communicating that they'll next hike interest rates in that quarter, that shift in attention will likely produce as much as an 8-10% decline in stock prices with respect to its projected trajectory. If investors fully redirect their focus to the 2017-Q4, then stock prices may rise by as much as 5%. And if investors have reason to split their focus between the two quarters, stock prices will fall somewhere in between, weighted to whichever future quarter investors are more strongly directing their attention toward.

As for telling how far forward investors may be looking, that takes paying attention to the market's news to understand the context of the market's information environment....

On 17 May 2017, the S&P 500 declined by 1.84% to close at 2357.83, which is a bit shy of the 2% threshold that usually marks where we find the stock market doing something interesting. We're calling the day interesting however because the Nasdaq (Index: IXIC) slumped by 2.57% to close the day at 6011.24, which technically makes the day almost interesting. 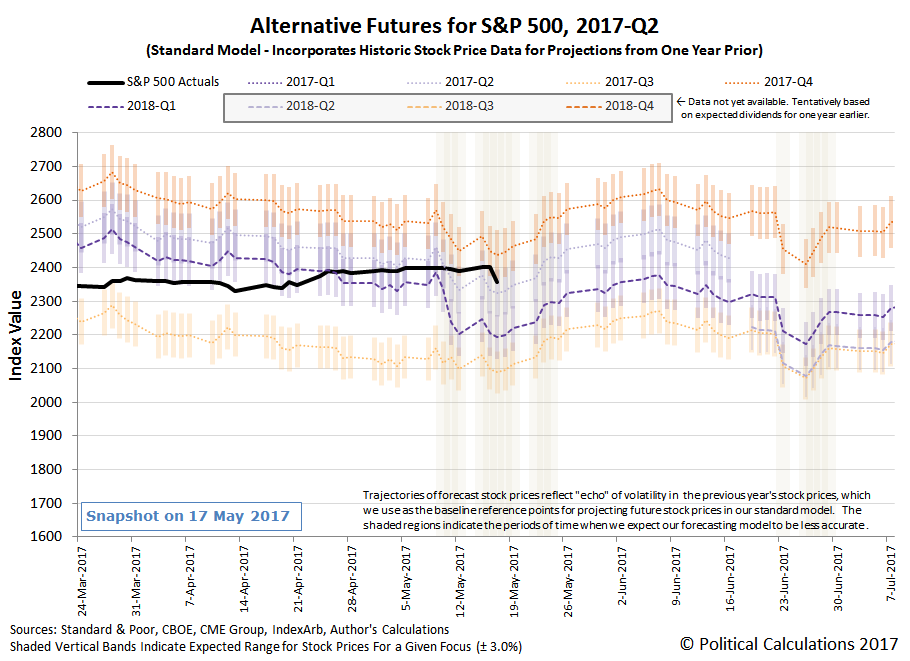 So do we find a shift in investor focus from the current quarter 2017-Q2 toward 2017-Q3? Why, yes, we do (after accounting for the mild echo from past stock price volatility that is slightly skewing the accuracy of our model's projections at this time)! Via ZeroHedge:

We warned last week that behind the scenes, professionals were increasingly speculating on a delay to the "baked in the cake" June rate hike.

The sudden surge in interest in Eurodollar calls (vs puts) suggests more than just a few prop bets are being placed on the fact that The Fed does not hike rates in June. 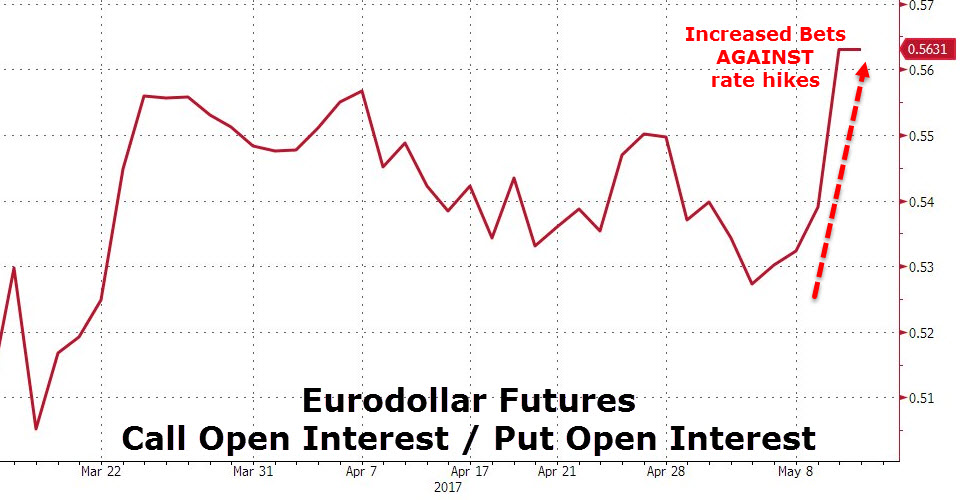 Well the last few days have seen that started to be reflected in the primary markets... as US macro data collapses (and Trumptopia tumbles). 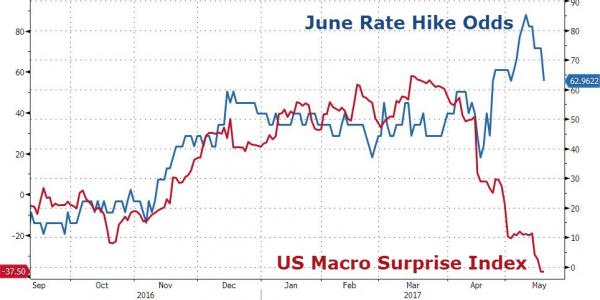 And we know how much The Fed hates surprising the market. However, by now it is becoming clear to even the most resentful permabulls - and even Goldman  - that the longer the Fed delays the day of reckoning out of pure fear of the unknown, the greater the chaos and loss in asset values when the Fed no longer has the luxury of picking when to pull the switch.

It wouldn't be ZeroHedge if their outlook weren't both gloomy and doomy. For our purposes however, there's no guarantee that stock prices will steadily travel all the way to where our model indicates that stock prices would be if investors were fully fixated on 2017-Q3. Instead, what's more immediately significant is the vertical distance between the trajectories indicated for investors focused on 2017-Q2 and investors focusing upon 2017-Q3 - that wide distance between them provides the space where the market's day-to-day volatility will have the real potential to be genuinely interesting, with the attention of investors perhaps swinging back and forth between those two points of time until things finally settle down.

Until that happens, it could make for some interesting times for the market in the very near term future.