Every now and again, a famous economist will say something that not only stands apart from everything else they've said and done, it turns out to be the defining quote of their entire life, regardless of what other achievements they may have had or contributions they may have made in their field. We thought it might be fun to revisit some of the more famous, or really, infamous, things that several famous economists have said that might very well be placed on their tombstones as their final epitaph.

Here's a very famous one about the U.S. stock market....


- Irving Fisher, 16 October 1929, less than two weeks before the U.S. stock market began to crash, marking the unofficial beginning of the Great Depression.

It's been said that if you laid every economist in the world on the ground end-to-end, you would never reach a conclusion. As proof, here's an opposing viewpoint on the U.S. stock market.

It really does now look like President Donald J. Trump, and markets are plunging. When might we expect them to recover?

Frankly, I find it hard to care much, even though this is my specialty. The disaster for America and the world has so many aspects that the economic ramifications are way down my list of things to fear.

Still, I guess people want an answer: If the question is when markets will recover, a first-pass answer is never.

- Paul Krugman, 9 November 2016, after which, the U.S. stock market quickly rose to reach a series of all-time-record highs over the next several months.

Some statements have to do with the health of the U.S. economy.

The Federal Reserve is not currently forecasting a recession.

- Ben Bernanke, 10 January 2008. Some time later, the National Bureau of Economic Research would mark December 2007 as the peak of the U.S. economy's period of expansion before it entered into the "Great Recession", where January 2008 was its first month of economic contraction.

But rest assured, all is well for the U.S. economy now.

"Would I say there will never, ever be another financial crisis?" Yellen said at a question-and-answer event in London.

"You know probably that would be going too far but I do think we're much safer and I hope that it will not be in our lifetimes and I don't believe it will be," she said.

It's almost like the Fed Chair is asking for that to be her economic epitaph! 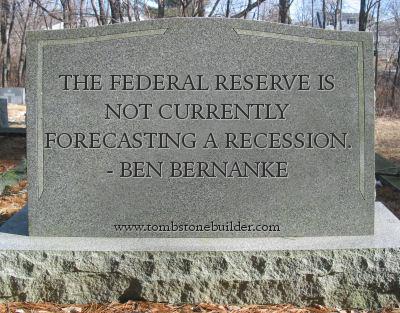