For a market where the S&P 500 isn't changing very much, there's a remarkable about of tension building up in it. Or more accurately, there is tension building in the halls of the big investment banks where big bets are being made, such as JPMorgan, whose top quantitative analyst is seeing great cause for concern that hasn't translated into market volatility (via ZeroHedge):

After getting virtually every market inflection point in 2015, and early 2016, so far 2017 has not been Marko Kolanovic's year, whose increasingly more bearish forecasts have so far been foiled repeatedly by the market, and the same systematic traders that he periodically warns about. As a reminder, his most recent warning came last week, when he cautioned that even a modest rebound in VIX could lead to dramatic losses for vol sellers. As a reminder, here is the punchline from his latest note:

Days like May 17th and similar events "bring substantial risk for short volatility strategies. Given the low starting point of the VIX, these strategies are at risk of catastrophic losses. For some strategies, this would happen if the VIX increases from ~10 to only ~20 (not far from the historical average level for VIX). While historically such an increase never happened, we think that this time may be different and sudden increases of that magnitude are possible. One scenario would be of e.g. VIX increasing from ~10 to ~15, followed by a collapse in liquidity given the market’s knowledge that certain structures need to cover short positions.

So in light of a market that refuses to post even the smallest of drawdowns (we are not sure if the words "selling", "correction" or "crash" have been made illegal yet), has Kolanovic thrown in the towel and declared smooth seas ahead? To the contrary: in a note released late last night, he echoes warnings made recently by both Citi and BofA, and predicts that receding monetary accommodation from ECB and BOJ will likely lead to "market turmoil, and a rise in volatility and tail risks" and just in case there is some confusion, he reiterates what he said last week, namely that the "key risk of option selling programs is market crash risk."

What Kolanovic is describing is a realistic mechanism by which stock prices might suddenly change dramatically for the worse. But is there anything to it?

That's where we have an angle on the story. Going by our dividend futures-based model, we would see that kind of potential plunge in stock prices as a sudden shift in investor focus from 2017-Q4, where our model suggests that investors are largely holding their attention at this time, to instead focus on 2017-Q3, where if such an event happened, it would likely coincide with a 300-350 point decline in the value of the S&P 500. 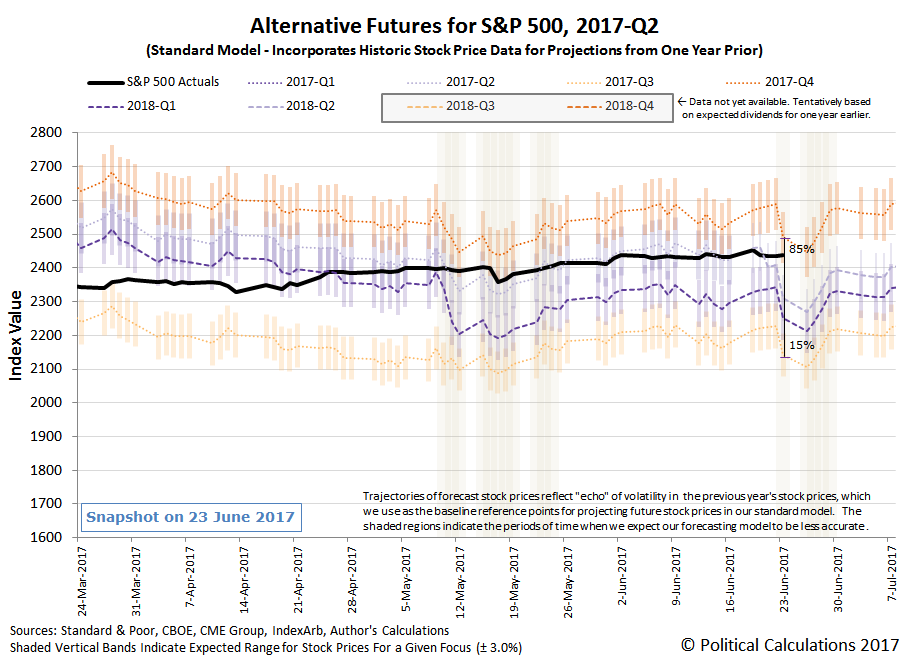 Now, here's the catch. For that to happen, something would have to fundamentally change in the expectations that investors have about the future to compel them to focus on 2017-Q3 instead of 2017-Q4.

One entity with the power to do just that is the Federal Reserve, which can in effect "command" investors to focus on 2017-Q3 through the statements its officials make about their plans for the timing of the Fed's next change in the Federal Funds Rate, which would affect all short term interest rates in the U.S. At present, our model suggests that investors only see a 16% probability of them taking that kind of action in or by its September 2017 Federal Open Market Committee meeting, but some Fed officials have been pushing in that direction, which explains why investors are not 100% focused on 2017-Q4 as the most likely timing for the Fed's next interest rate adjustment.

Another factor that can shift the attention of investors is the changing expectations for future earnings in the companies that make up the S&P 500. For example, should oil prices fall even further than they have in the last several weeks, that could reignite the concern that the oil and gas sector of the U.S. economy is in for a new round of economic distress, which could lead investors to focus on these companies in the near term, pulling the index down along the way.

Or, oil prices could rise sharply, which would both boost the oil and gas sector of the U.S. economy while straining other sectors, which would also have the same effect. Or, they could rise just enough, contributing to the kind of inflation that would potentially prompt the Fed to pull the trigger on its next rate hike sooner than investors are expecting today.

In all this, the random onset of new information is the potential trigger for unleashing a significant change in the S&P 500, where the interactive dynamics are both very complex and periodically chaotic.

And that's just considering how changes in how far forward in time investors are focusing their attention might affect stock prices. If the expectations for future dividends themselves change, that would very directly affect stock prices, which adds a whole other level of complexity in how stock prices behave.

Speaking of which, if you want to know which scenario might apply before Kolanovic's mechanism becomes engaged, you might want to keep up on the information coming into the market....

Elsewhere, Barry Ritholtz summarized the positives and negatives for the economy for Week 3 of June 2017.