For a week where there was a lot of potential for volatility to erupt in the U.S. stock market, the S&P 500 showed little sign of it.

The closing price of the S&P fell well within the range our dividend futures-based model anticipated for investors focused on the current quarter of 2017-Q2, which largely matches what other futures-based models indicate, at least with respect to the expected timing of the Fed's next U.S. interest rate hike. 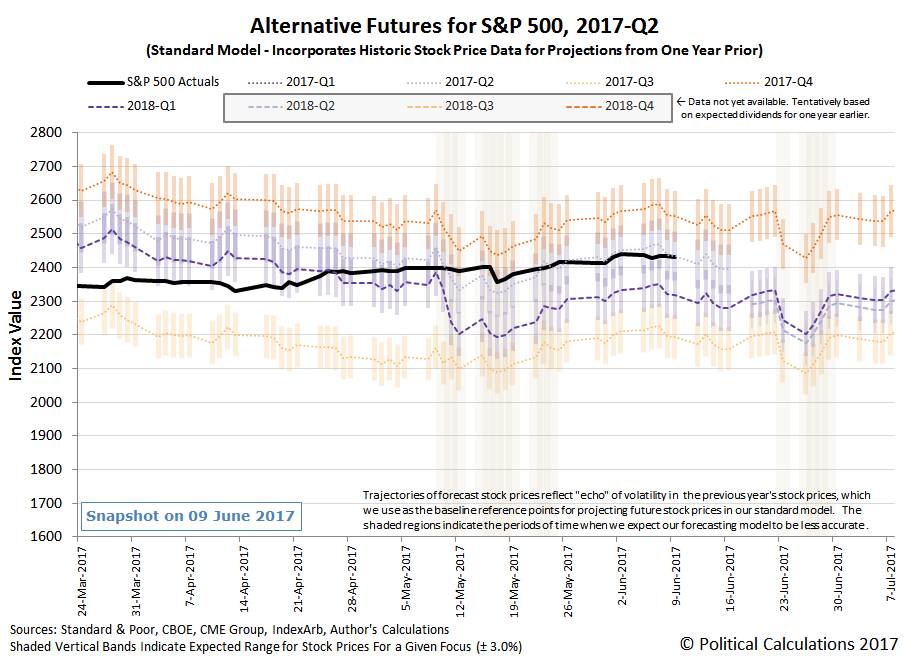 The problem with that is that the Fed will announce its intended action during the second full week of June 2017, which also contains the third Friday for the month, which means that the window for the current quarter's dividend futures is about to close and investors will be forced to shift their attention toward other points of time in the future. What we've been describing as the ticking clock problem for the S&P 500 has now fully gestated.

And that's where we're starting to see the U.S. stock market become schizophrenic, which became noticeable on Friday, 9 June 2017, which saw the Dow Jones Industrial average (Index: DJI) hit new highs even as the Nasdaq (Index: IXIC) looked like it was going to crash after hitting an intraday high. 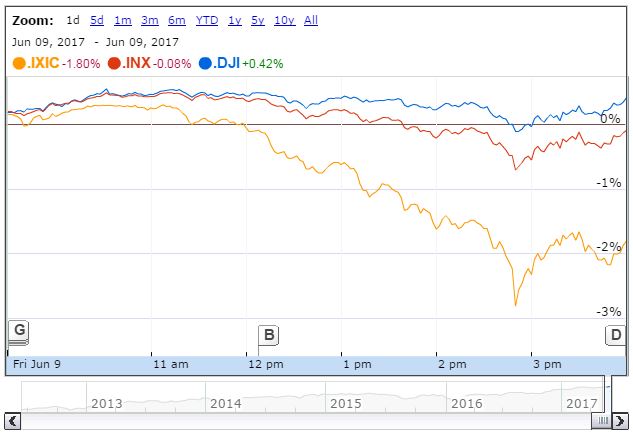 The S&P 500 (Index: INX), which overlaps both major market indices, closed just slightly lower than it started the day. What we think may going on is that investors in different parts of the market are shifting their focus to different points of time in the future, with Nasdaq investors looking ahead at 2017-Q3 and Dow Jones Industrials investors looking farther forward in time to 2017-Q4. Combined, the better expectations for 2017-Q4 offset almost all of the more negative expectations associated with 2017-Q3 where the expected changes in the year over year growth rate of the S&P 500's dividends per share are concerned.

Investors in the S&P 500's component companies showed similar behavior coming into 2017-Q2, when there was a question of when the Fed would next raise interest rates within 2017-Q2 or delay the next hike to 2017-Q3. Ultimately, as more information became known, they settled in on 2017-Q2, where the Fed will almost certainly hike interest rates this week.

It's not unusual to find investors splitting their forward-looking attention between two different points of time in the future that have very different expectations associated with them. What is unusual is that forward-looking focus appears to be so split between different sectors of the stock market. We'll find out soon in the very near term future which sector carries more weight these days!

Until then, here are the headlines that we believe capture the more relevant parts of Mr. Market's internal dialogue this past week....

Finally, we would be remiss if we didn't share one of the more interesting pagan "theories" behind the Nasdaq's remarkable decline on Friday, 9 June 2017, where it has been suggested that everyone's favorite vampire squid-run investment bank was responsible for the Nasdaq's rapid swing from record highs to hard fall because its analysts introduced a new acronym (FAAMG) to describe the top tech stocks whose stock price performance has been boosting the entire stock market by calling attention to them. What have those analytical heretics wrought for us all?