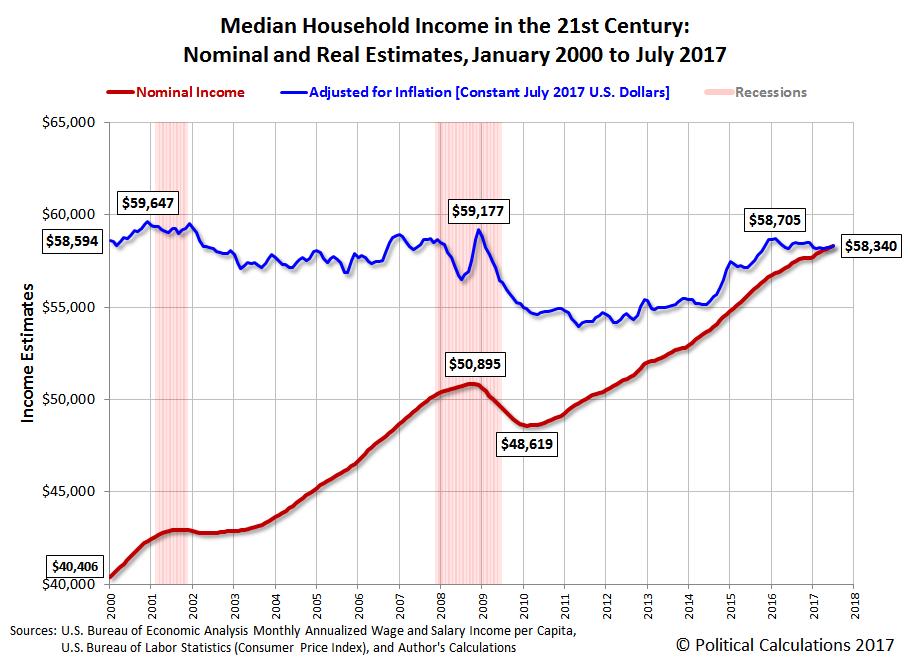 In terms of current U.S. dollars, the median household income in the U.S. has been slowly rising since January 2017. However, after adjusting the nominal income data to be in terms of inflation-adjusted, constant July 2017 U.S. dollars, we can see that the trend since January 2017 has been flat after having trended slowly downward from its most recent "real" peak at the beginning of 2016. Our estimates of median household income since January 2000 indicate that this measure of the well-being of the typical American household has not recovered to the peak levels recorded in either late 2000 with the peak of the Dot-Com Bubble or the peak that was reached during the Great Recession that coincided with the failures in the U.S. automotive and financial industries in the last quarter of 2008.

The methodology for the approach we've developed to generate these replacement estimates is described here. In generating the July 2017 update for the Median Household Income in the 21st Century chart above, we've used the Consumer Price Index for All Urban Consumers (CPI-U) to adjust the nominal median household income estimates for inflation.

The BEA revised its aggregate wage and salary personal income data for the period from January 2017 through June 2017. For June 2017's revised data, our methodology produces an estimate for median household income of $58,266, which is just $8 higher than our previous estimate for that month.