Now that we're just past the halfway point for the third quarter of 2017, let's take a quick look to see how the pace of dividend cuts in 2017-Q3 compares with the year-ago quarter of 2016-Q3. The following chart shows the data we compiled for both periods from Seeking Alpha's Dividend News resource and the Wall Street Journal's Dividend Declarations database. 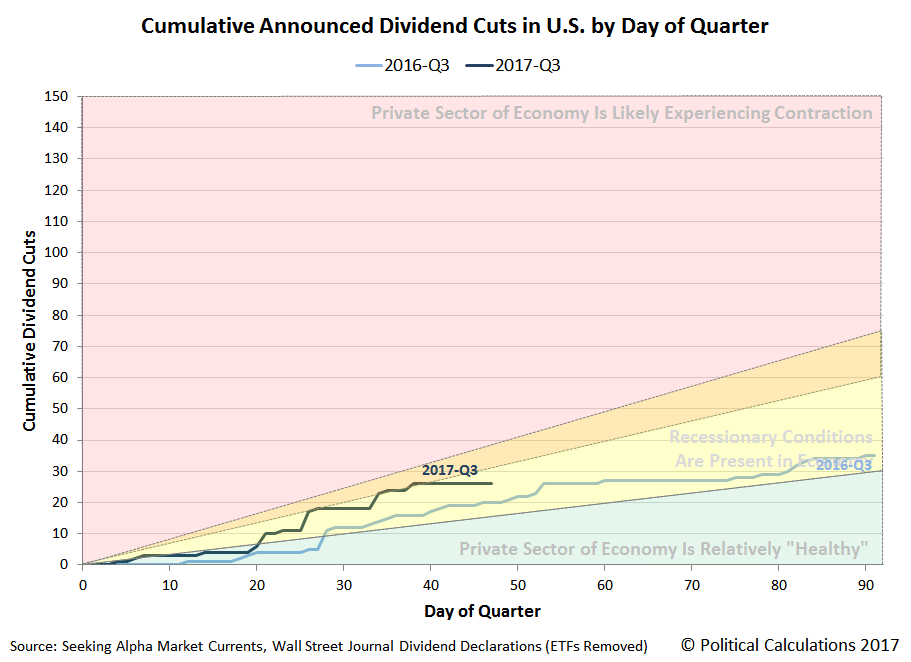 Looking to see which companies among the 26 that have announced dividend cuts at this point of 2017-Q3 can tell us where those recessionary conditions might be found, where we find a strong concentration in two industries of the U.S. economy: the oil and gas production sector with 19, and the financial industry with 6, although most of these are firms with significant real estate holdings, such as Real Estate Investment Trusts (REITs).

If you're doing the math at home, the dividend cuts announced in those two industries add up to 25. The remaining firm in our sample is gun manufacturer Sturm Ruger (NYSE: RGR), which reflects the decline in U.S. gun sales since President Obama's exit from office, which has also negatively impacted sporting goods retailers.

Considering the elephant in the room however, we can identify the decline oil prices during 2017 as the primary contributing factor to the increase in distress in the U.S. oil and gas industry, where sustained crude oil prices below $50 per barrel have been putting that industry's margins under pressure.

As for the REITs, the Federal Reserve's series of interest rate increases since November 2016 would appear to be pinching the profit margins in that sector of the economy, although the exposure to distress appears limited at this time.

Finally, comparing the pace of dividend cuts in 2017-Q3 to what we observed during the first two quarters of 2017, we find that the current level of announced dividend cuts is about the same at this point of time as what we saw in both 2017-Q1 and 2017-Q2, although it had been slightly faster during the earlier part of the quarter.