Political Calculations
Unexpectedly Intriguing!
September 5, 2017
The Aftermath of Hurricane Harvey and the S&P 500 in Week 5 of August 2017

The biggest news story in Week 5 of August 2017 was the ongoing aftermath of Hurricane Harvey in Houston, Texas, which in addition to being almost at the center of damage produced by the natural disaster, is the fourth largest city in the United States and also the defacto capital of the nation's energy industry. 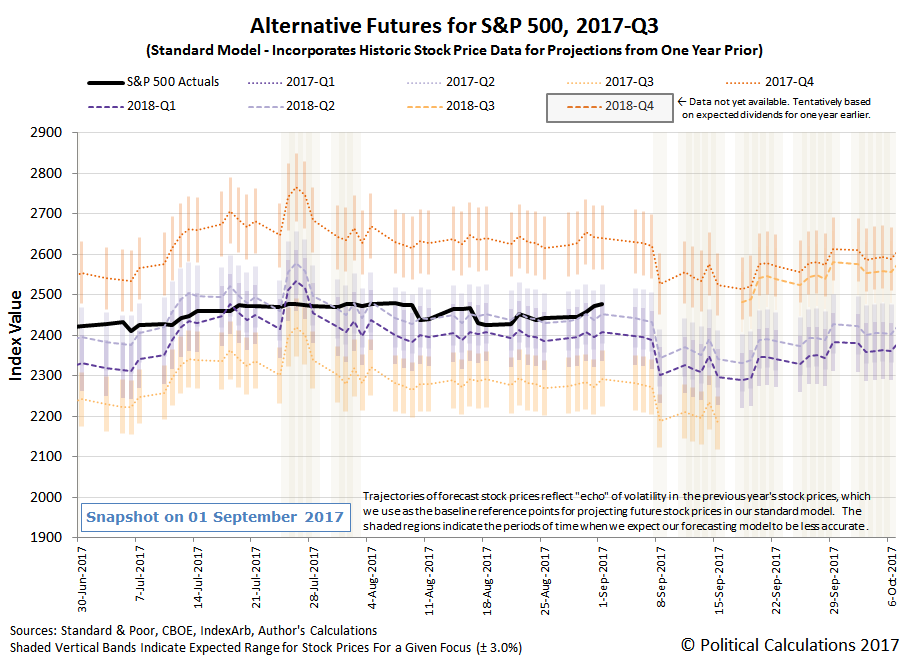 In response to the Hurricane Harvey, the CME Group's FedWatch tool is now indicating that there will be no change in short term U.S. interest rates from their current 1.00-1.25% target range through the first quarter of 2018. Investors are currently betting that the Fed will next change its Federal Funds Rate in 2018-Q2, at the 13 June 2018 meeting of the Federal Open Market Committee, when it is expected to boost it, most likely to the 1.25-1.50% range.

As to why the S&P 500 behaved as well as it did in the fifth week of August 2017, a beginning explanation may be found in the Gulf coast city of Corpus Christi, which has become a major export center for U.S.-produced oil and gas, which was also near the epicenter for where Hurricane Harvey made its landfall. The city's port facilities appear to have weathered the storm well despite some notable damage to vessels in the port, where the port itself and nearby refineries successfully reopened several days earlier than expected on Thursday, 31 August 2017.

Meanwhile, here were the other headlines of note that we flagged during the final week of August 2017.

Elsewhere, Barry Ritholtz captured the positives and negatives for the U.S. economy and markets in Week 5 of August 2017.

On a final note, if you look at our alternative futures chart above, you'll see that we're coming up on another one of those periods where the echoes of past volatility in stock prices will affect the accuracy of our standard forecasting model for the S&P 500, which will hit during the latter part of the upcoming week. At this time, we anticipate that the S&P 500 will largely continue to move mostly sideways, where the level of the S&P 500 will end the week somewhere around 50 points higher than where our unadjusted model indicates. We'll look at adjusting our forecast chart to account for the echo effect in next week's edition!