Although it only lasted from 17 August 2017 through 2 September 2017, Hurricane Harvey will have an impact on trade between the U.S. and China.

The reason why has everything to do with its impact on Texas' ports, like Corpus Christi, where crude oil is loaded onto large container ships whose destination is China.

The meteoric growth of U.S. oil exports to China is perhaps one of the most underreported economic stories of 2017, which many mainstream media sources have only begun to catch onto in recent months. The growth of these exports directly increases the U.S.' national GDP and reduces the nation's trade deficit with China.

That growth however will be disrupted by the impact of Hurricane Harvey as it closed Texas' ports until the storm passed and the ports could reopen after clearing or repairing damaged equipment and vessels. Corpus Christi, which is on track to becoming the United States' "main energy export hub", was closed from 25 August 2017 through 31 August 2017, at which time no vessels bound for China were loaded with oil.

That weeklong shut down at Texas' ports will likely show up in the U.S. Census Bureau's U.S-China trade data for either August or September 2017, where the data for August will be released on 5 October 2017.

But the closure of Texas' ports will not be the only contributor to reduced U.S. energy exports. Port Arthur, Texas' VPS-5 refinery, the largest oil refinery in the U.S., just reopened on 11 September 2017 after having been closed for two weeks due to Hurricane Harvey, so we can also expect to see the impact of its closure show up in the energy export data for September 2017, which won't be released until November 2017.

So that makes the following chart showing the growth rates of total value of goods and services exported between the U.S. and China the "Before" picture for the impact that Hurricane Harvey will have on the U.S.' energy exports in the third quarter of 2017. 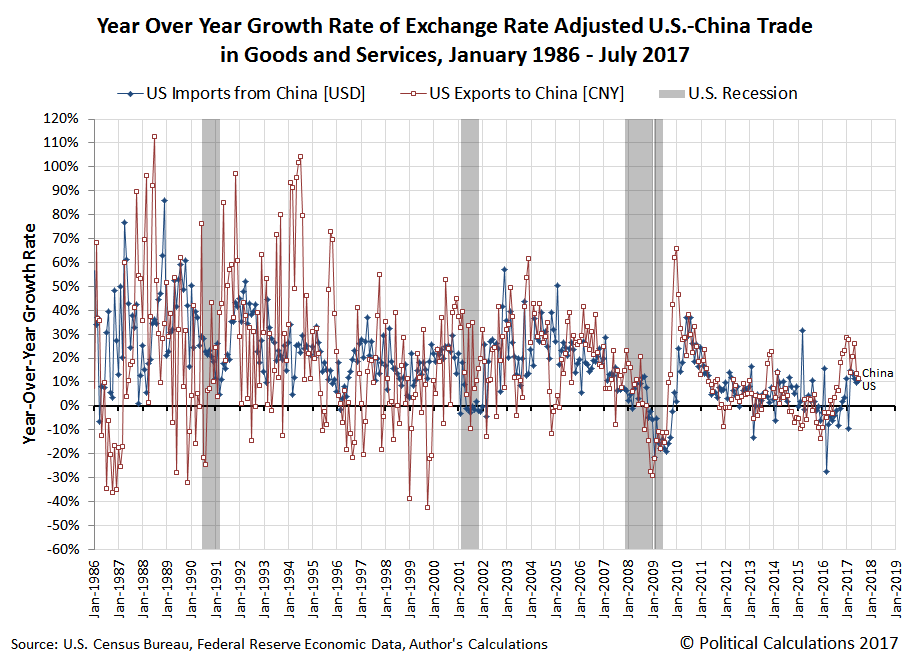 The chart indicates relatively healthy conditions in both the U.S. and China, as the year-over-year rate of growth of both nations' exports to each other in July 2017 are both near 10% annual growth.

If the Census Bureau's August data captures the last week of that month however, we would expect to see the growth rate of U.S. exports to China drop relative to China's exports to the U.S. when that data is released in October, and again for September 2017's data when it is released in November.