Although it was shortened by the Memorial Day holiday, the fifth and final week of May 2018 marked a potential shift in focus for the S&P 500.

Going into the week, investors appeared to be largely focusing their forward-looking attention toward the current quarter of 2018-Q2 as they went about setting stock prices, which is something that isn't going to continue for very much longer, seeing as we're running out of 2018-Q2 to focus upon.... 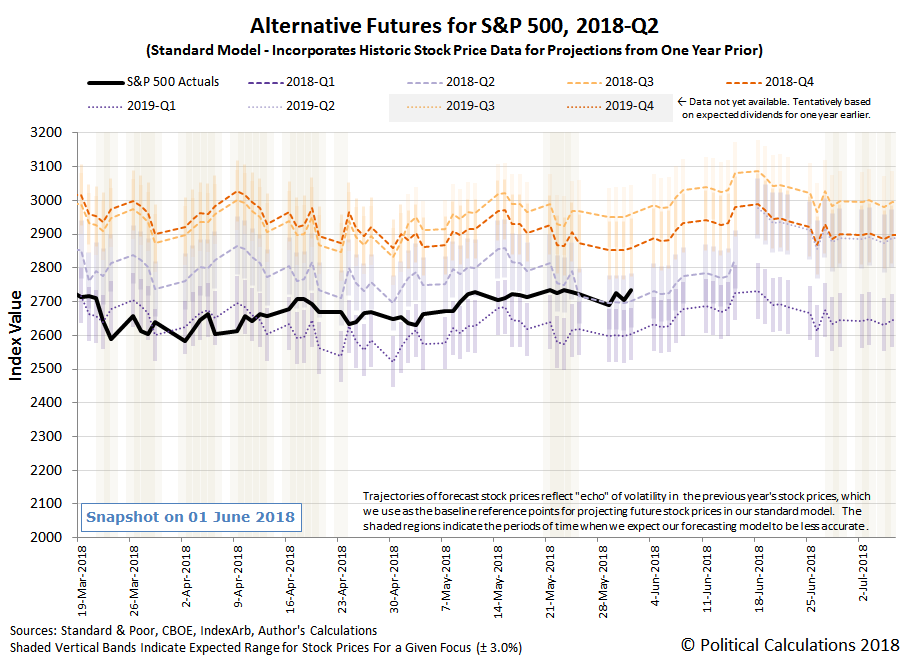 By itself, that ticking countdown clock would be enough to generate a shift in the forward-looking focus of investors to another point of time in the future, but it was a stellar jobs report on Friday, 1 June 2018 that really opened up a potential positive future for stock prices.

The strong jobs report increased the likelihood of the U.S. Federal Reserve acting to hike short term interest rates for a fourth time in 2018, where previously, investors had been anticipating only three rate hikes in 2018, with a pause in the fourth quarter, before the Fed might resume increasing its Federal Funds Rate once more in the first quarter of 2019.

But with the U.S. economy appearing to be set to perform more strongly in 2018 than had previously been anticipated, the prospects of adding another rate hike in the fourth quarter of 2018 provides a reason for investors to focus upon the expectations for that future quarter, which our dividend-futures based model suggests would prompt investors to bid up stock prices above their current level. The following table shows a snapshot from Friday, 1 June 2018 of the probabilities of the Fed hiking interest rates at selected meeting dates for its Open Market Committee from the CME Group's FedWatch tool.

While the probability of another rate hike in the fourth quarter of 2018 has increased from what it was in the days prior the 1 June 2018 jobs report, it is by no means guaranteed at this point of time, which the CME Group's Fed rate hike probabilities confirm. The increased probability though does however provide a more positive alternative for investors to focus upon as compared to the more distant future quarter of 2019-Q1, which would correspond with a decline in stock prices from their current level. It also opens up the possibility of investors splitting their attention between the two quarters, with stock prices having an increased level of volatility until the expectations for the future settle themselves out.

Which means that instead of experiencing another summer of doldrums like 2017, with such a large difference between the expectations for the future of the growth rate of dividends per share associated with 2018-Q4 and 2019-Q1, the stock market might be much more interesting in the summer of 2018!

That's enough analysis for this week. Here are the news headlines of the week that was the fifth and final week of May 2018....

Elsewhere, Barry Ritholtz listed more positives than negatives for the U.S. economy and markets in Week 5 of May 2018.