There was one major economic event that occurred last week and it shifted the forward-looking focus of investors, sending stock prices sharply downward as a result.

That event was the partial inversion of the U.S. Treasury yield curve that took place on Tuesday, 4 December 2018. A yield curve inversion occurs whenever the yield, or interest rate, of a longer term bond or note issued by the U.S. Treasury Department falls below the level of a shorter term bond or note. This kind of event is often associated with an increased likelihood of an economic recession in the future, when businesses can expect to experience falling levels of earnings and cash flow, which is why stock prices would fall in the current day even though any economic distress is only in the potential outlook for the future and is not as yet guaranteed.

For a quick recent history of the Treasury yield curve, check out TheFirsh's two-minute long animated chart of the curve's history since 1990. Recessions followed within 1-2 years of significant yield curve inversions that occurred in 1989-90, 2000 and 2006-07 (the animation ends at the end of November 2018, so it doesn't capture the latest inversion).

On Tuesday, 4 December 2018, the yield of the 5-year Treasury dropped to be lower than the yields of the 2-year and 3-year notes. Although the amount by which the 5-year note dropped below the 2 and 3 year notes is small, the negative implications of the event were amplified thanks to the highly influential New York Fed branch president John Williams, whose unfortunately timed and tone-deaf hawkish comments promising additional short-term interest rate hikes well into 2019 prompted investors to shift a significant portion of their attention beyond 2019-Q1 to the more distant future quarters of 2019-Q3 and 2019-Q4, where the expectation is already well established that these quarters will experience a significant deceleration in the growth rate of dividends.

At a time when investors are sensitive to the potential for economic distress ahead, a Fed branch president announcing that they think the Fed should keep hiking interest rates well into 2019 is the equivalent of pouring gasoline onto a small campfire in a dried-out, under-maintained, underbrush-thick section of California's state forests. It's a stupid own-goal, on par with one of former Fed Chair Ben Bernanke's bigger mistakes.

That was all it took to send stock prices sharply lower through the end of the first week of December 2018. The S&P 500 broke out of the final portion of our red-zone forecast, where we had assumed that investors would largely remain focused on 2019-Q1 through 7 December 2018, where we find that investors have instead shifted a little over 50% of their forward-looking focus toward 2019-Q3 or 2019-Q4 (there's not much difference in where the level of the S&P 500 would be for investors focusing on either future quarter). It's early, but it's looking like we're seeing the fifth Lévy flight event of 2018. 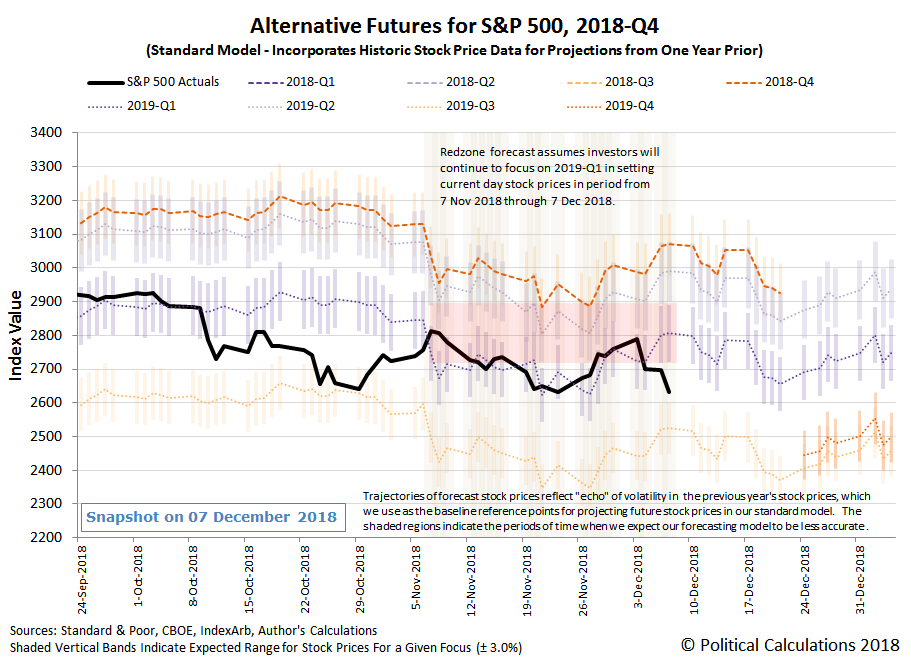 That explains how and why the level of the S&P 500 got to where it is as of the end of Week 1 of December 2018. We've also come to the end of our redzone forecast period, where out of 20 days where the market was open (markets were closed on Wednesday, 5 December 2018 to mark the passing of former U.S. President George H.W. Bush), the S&P 500 closed within our forecast range on 10 of those days.

While our redzone forecast turned out to be wrong for 50% of the actual observations, the lowest level of accuracy we've ever achieved over a forecast period, it proved to be very useful in detecting when investors shifted their forward-looking attention away from 2019-Q1 toward other more distant future quarters during the past month. We can also confirm that stock prices are not following the echo of October 2018's market volatility.


While the Treasury yield curve inversion was the most significant, market-moving event of the first week of December 2018, other stuff happened too, where the stuff we think is worth noting is listed below....

Meanwhile, Barry Ritholtz reviewed the week's major economy and market-related news and divided it up into its positives and negatives. Unfortunately, he missed the developing yield curve inversion as the week's biggest market-driving negative, but he picked up on other factors that we didn't cover. This week is a good example of why it's beneficial to take in a range of analytical viewpoints!