From time to time, we test out hypotheses that make for interesting discussion. For example, let's consider the impact of two recent 737 crashes on Boeing's stock price (NYSE: BA).

Here, we had the idea that if we compared Boeing's stock price with that of another company whose fortunes are closely tied to Boeing, we could perhaps get an indication of how investors are pricing the company's potential legal liability for the Lion Air Flight JT610 crash on 29 October 2018 in Indonesia, which killed 189 people, and the Ethiopian Airlines Flight ET302 crash on 10 March 2019, which killed 157 passengers and crew, by comparing Boeing's stock price with that of Spirit Aerosystems (NYSE: SPR). The following chart shows the trajectory of both companies' stock prices from 15 October 2018 through 12 April 2019, where we've also indicated the timing of the two crashes. 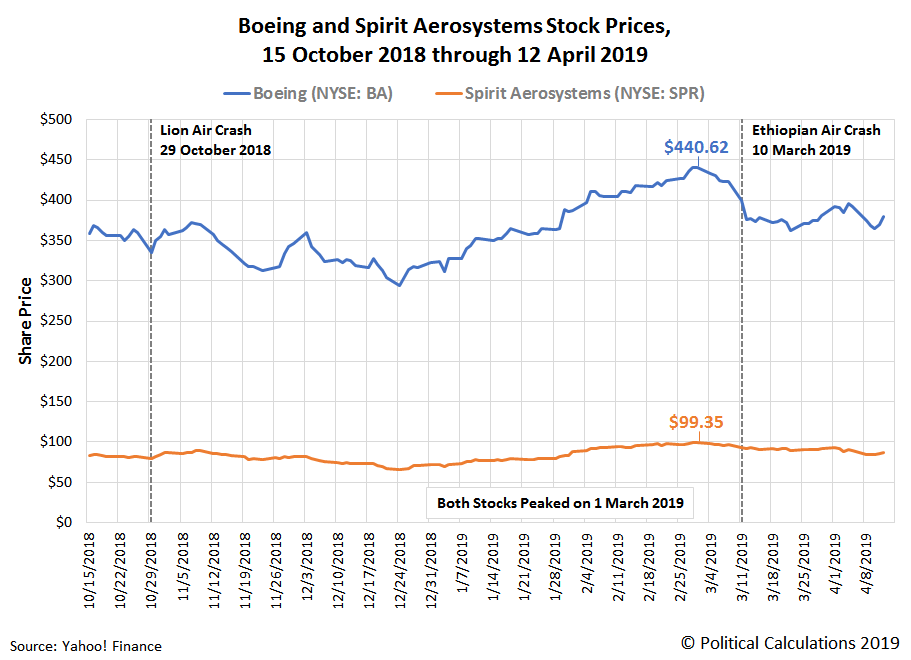 This comparison is particularly relevant because Spirit Aerosystems manufactures the fuselage of Boeing's 737 MAX aircraft. Our hypothesis was that because the cause of the two recent Boeing 737 MAX crashes have been attributed to faulty sensors and software malfunctions, Boeing's stock would show a relatively greater decline than Spirit Aerosystems, where because the fuselage is a mechanical structure, we reasoned that Spirit would only be exposed to reductions in Boeing's production of the 737 MAX, while Boeing would bear the additional burden of legal liability related to the two crashes linked to the sensor and software failures.

It sounds plausible, and in the initial reaction of both companies' stock prices to each crash, it also looks plausible, but there is some strange synchronization going on between the stock prices of the two companies, which you can see in the next chart as we've tracked each company's stock price as a percentage of the peak market closing values both companies simultaneously reached on 1 March 2019. 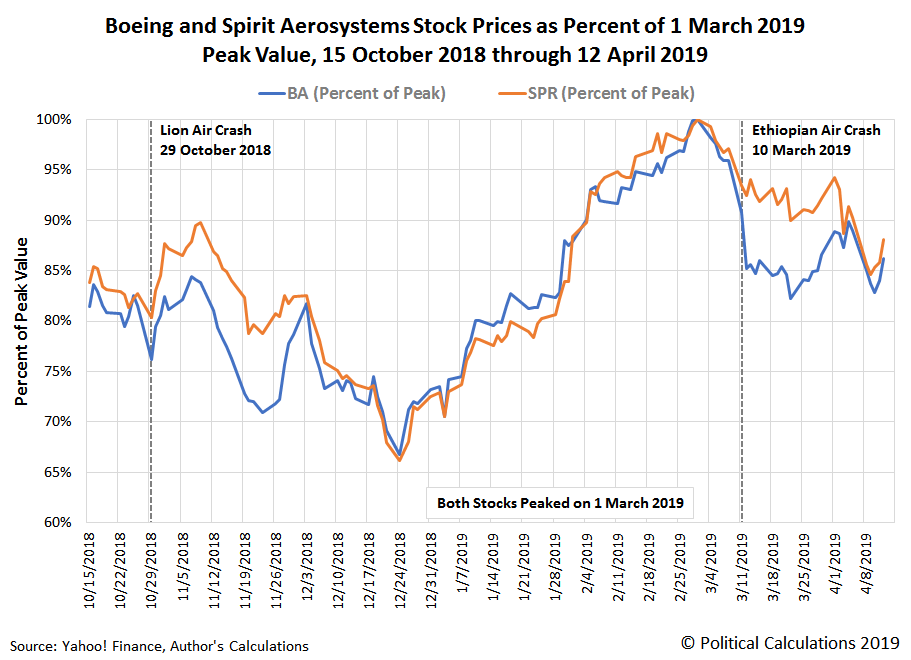 It's no surprise to find that the two companies' stock prices are closely synchronized to each other, with their changes over time typically falling within a few percentage points of each other. It's also not strange to see that Boeing's share price did indeed bear a heavier burden than Spirit Aerosystems' stock price did in the immediate aftermath of both 737 MAX crashes.

What is a bit strange is how they've gone about recoupling to each to other's performance after each crash event. Following the Lion Air crash, we find that Boeing's stock price surged after 27 November 2018 to catch up to the level of Spirit Aerosystems' stock within the matter of a week. Which kind of makes sense because at that time, it seemed that Boeing would avoid having exposure to any additional legal liability from that crash.

But that pattern was reversed after the Ethiopian Air crash, where Spirit Aerosystems' stock price was the one that moved to recouple with Boeing's relative stock price performance after 2 April 2019, which it did by dropping down to Boeing's level. We suspect that may have been speculation on the part of investors that production of the 737 MAX aircraft would be reduced as news that the grounding of the troubled aircraft would extend longer than expected emerged. Although Boeing had resisted it, the situation with so many aircraft on the ground and order cancellations forced its hand as the production cut announcement for the 737 MAX finally came on 8 April 2019.

Boeing should still has greater exposure to legal liability from the crashes, so it will be interesting to see how its relative stock price performance evolves over time as those costs become better quantified. As long as it does, we should see it as a persistent relative underperformance when compared with Spirit Aerosystems' stock price.

At least until the legal issues are finally in Boeing's rear view mirror. We'll see how that hypothesis works in practice.