On 22 December 2017, President Donald Trump signed the Tax Cuts and Jobs Act of 2017 into law. Here's a brief overview of the major changes, which we've condensed from a lengthier discussion at CPA Journal:

The linchpin to this tax legislation is a reduction in individual tax rates. While the current number of tax brackets has been retained, each one has been reduced slightly.

The personal and dependency exemptions are repealed, while the deduction for student interest that had been slated for repeal is retained. Other changes to deductions include the following:

Most Americans would have noticed some of the changes prompted by the new tax law in mid-February 2019, when new tax withholding rules took effect and changed the amount of money they could take home after taxes on their paychecks. But the bigger changes from changes in the standard deductions wouldn't be noticed until they filed their income taxes for 2018, which were due on 15 April 2019.

Tax preparer H&R Block (NYSE: HRB) itemized the overall year-over-year changes that millions of their middle-class household clients who had filed their annual returns by the end of March 2019 were seeing for their annual federal tax bills.

H&R Block data through March 31, 2019 shows the size of its clients’ tax refunds is up 1.4 percent under the first year of tax reform and new withholding tables, while overall tax liability is down 24.9 percent.

As H&R Block notes, that combination of smaller refunds and dramatically lower tax bills (or tax liability, as H&R Block describes it) is directly attributable to the changes in tax withholding rates, which shrank the size of refunds by letting Americans keep more of their pay without giving the U.S. government an overly generous interest-free loan by overwithholding their income taxes throughout the year.

Meanwhile, corporations saw roughly a 30% reduction in their tax liabilities during 2018 as a direct result of changes made by the new tax law. 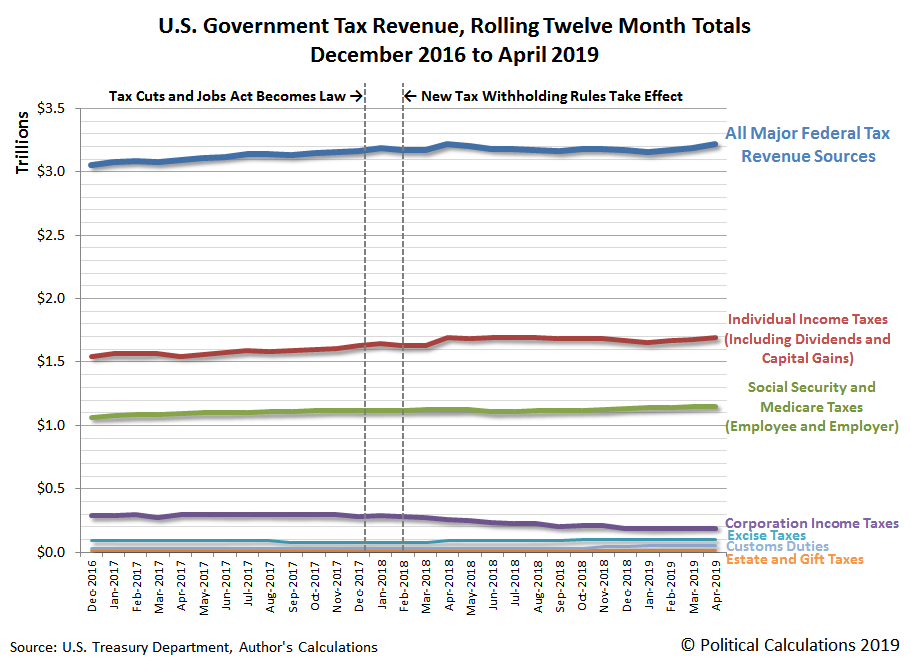 The trailing twelve month totals gives us a pretty good sense of how tax revenues have changed over all this time while smoothing out month-to-month volatility. What we see is that through April 2019, which captures the majority of tax returns filed for the 2018 calendar year, the U.S. government's total tax revenues from all its major sources is nearly the same as in April 2017, when the old, higher tax rates applied for those filing taxes.

At the same time, we see a shift from corporation income taxes, which decreased, toward individual income taxes, which increased by a similar amount to offset a large percentage of the reduction in corporation income tax revenues. That is at least partly attributable to what businesses did with the extra money they gained from their reduced tax rates, some of which found its way to their employees in the form of bonuses or higher wages, while some found its way to their shareholding owners in the form of higher dividend payments and share buybacks.

These latter two categories would boost the federal government's revenues from individual income taxes through dividend taxes and through capital gains taxes, both of which are reported on individual income tax returns. We'll be curious to see how much the government collected through these personal income taxes when the IRS updates its Statistics of Income to include the details for the 2018 tax year, which will happen sometime in the next two years.

We'll also be interested to see how much additional taxes were collected because of the new cap on the amount of state and local taxes that can be deducted on federal tax returns in 2018, which primarily affects people with high incomes who live in high tax states.

Finally, the U.S. government's tax revenues were boosted during the period in which the Tax Cuts and Jobs Act has been in effect by smaller increases in employee and employer-paid Social Security and Medicare taxes, Excise taxes and Customs Duties (Tariffs).