The S&P 500 (Index: SPX) didn't implode during the third week of September 2019, as the results of the drone and missile attacks on Saudi Arabia's oil fields proved to be less disruptive to global oil supplies than initially feared. At the same time, the potential for an immediate escalation in the conflicts between Saudi and Iranian interests in the Middle East was avoided, which allowed oil prices to return to lower, but still elevated levels after spiking sharply upward on Monday, 16 September 2019 in the initial response to the attacks.

And then, there was the Fed. The Fed acted to cut short term interest rates in the U.S. by another quarter point on Wednesday, 18 September 2019, which prompted a negative spike in the U.S. stock market immediately after the announcement, which then quickly dissipated after top Fed officials hinted at the return of its quantitative easing programs in upcoming months.

So while there was more than one major fireworks show that could churn up stock prices during the week, the potential effect on the S&P 500 was largely suppressed. If it weren't for Friday, 20 September 2019 being a quad witching day, marking the end of multiple futures contracts and raising the probability of volatility from the all the associated trading activity, the overall change in the S&P 500 would have been suppressed to be within a point of where it closed the previous week. With the quad witching day however, the S&P 500 still ended the third week of September 2019 just 15.32 points lower than it closed the previous week.

Consequently, investors maintained their focus on the distant future quarter of 2020-Q1 in setting stock prices throughout the week, where stock prices ended the week just about exactly where our dividend futures-based model would put them with that particular focal point: 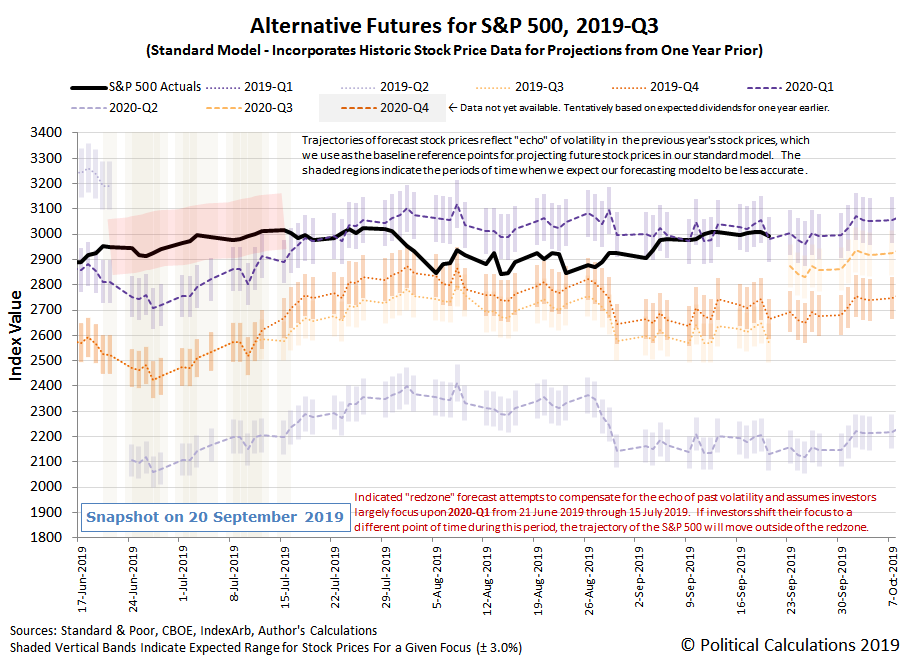 That's because the model has continued to work well in anticipating future stock prices without adjustment, where the Fed's meeting this week provided us with the opportunity we needed to confirm its calibration. The trajectory of stock prices during this past week has proven to be well within the range of values we would expect if investors were closely focused on 2020-Q1, so the model is performing well in the current environment, as the flow of new information helps explain why they have kept their attention on that future quarter.

Speaking of the flow of new information, here are the headlines we tagged during the week that was for their market-moving potential:

Need a bigger picture on what happened in the third week of September 2019? Barry Ritholtz has you covered, providing a list of 6 positives and 6 negatives he found in the week's economics and market-related news.

The easy question for the weeks ahead is: "what will happen to stock prices if investors shift their attention to another point of time in the future?" The answer to that is a simple problem in quantum kinematics. The big money question is: "how long will investors be compelled to hold their attention on 2020-Q1 before they shift it to a different point of time in the future?"

And regardless of how you might answer that question, how would you set up your investing strategy to take advantage of any such shift when it might develop into an opportunity?