Two weeks ago, the S&P 500 (Index: SPX) fell because investors believed the prospect of the Fed cutting rates in the first quarter of 2020 had been taken off the table as the chances the Fed would cut rates during the fourth quarter of the current year became an even money bet.

What a difference a week makes. By the end of the first week of October 2019, not only had the odds of a quarter point rate cut in 2019-Q4 almost been locked in, the probability of another quarter point rate cut in 2020-Q1 was back in play. Here's a snapshot of those rate cut probabilities as given by the CME Group's FedWatch Tool at the close of trading on Friday, 4 October 2019: 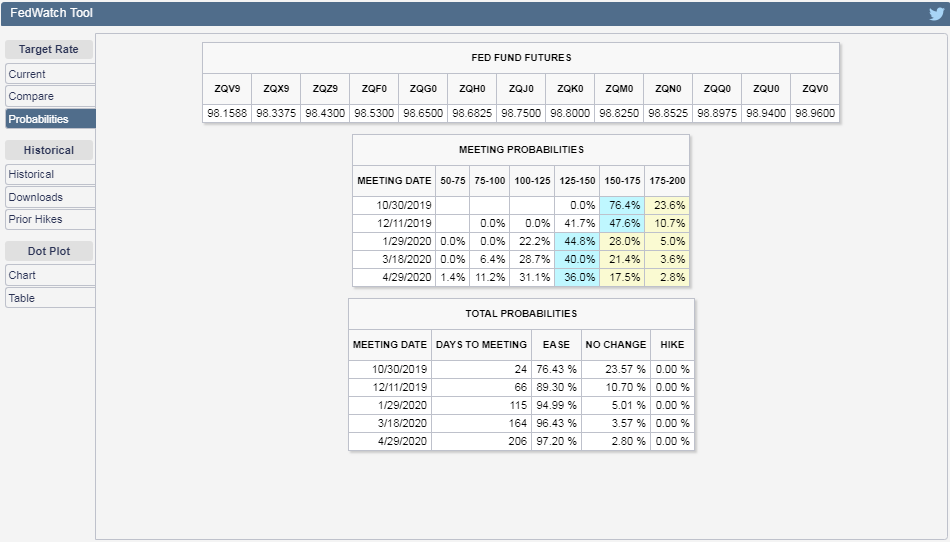 Given the math behind how stock prices work, that shift in the forward-looking focus of investors was accompanied by a rebound in stock prices off their lows for the week. 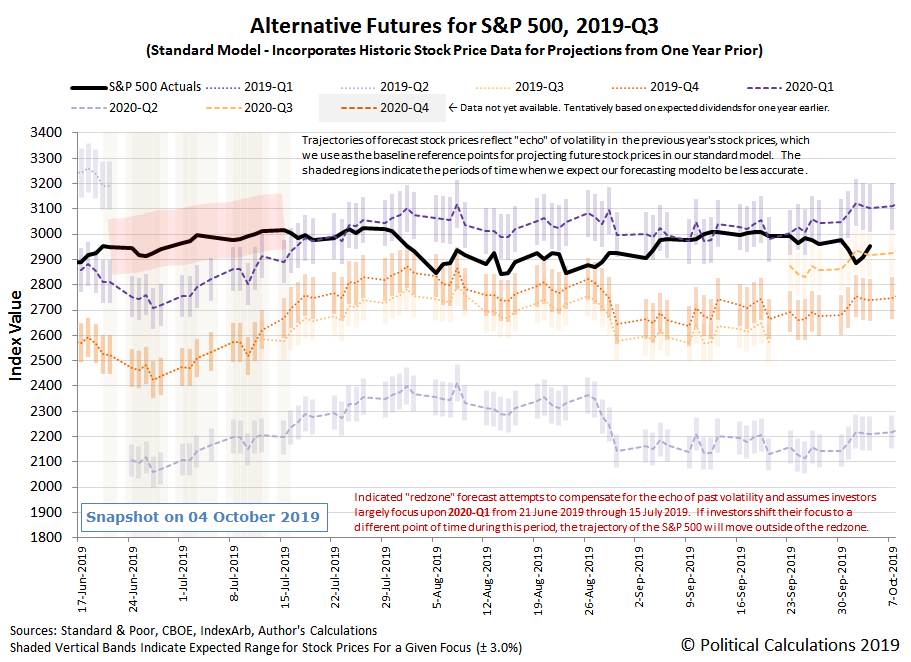 It certainly isn't for a lack of looking for evidence supporting a shift in attention toward 2020-Q3 on our part. Here are the market moving headlines we identified during the first week of October 2019, where we find lots of evidence in support of the investors looking at either 2019-Q4 or 2020-Q1, but not any further into the future.

Elsewhere, Barry Ritholtz extracted six positives and six negatives from the past week's economics and market-related news, where unicorns made both sides of the ledger!

As a bonus, Barry also interviewed Robert Shiller for his Masters In Business podcast on Bloomberg, where he cited Shiller's seminal 1981 paper "Do Stock Prices Move Too Much to Be Justified by Subsequent Changes in Dividends?". It's pretty amazing how far we've come in the last 38 years, where in 1981, Shiller didn't have access to dividend futures and thus couldn't quantify the volatility that arises from investors rationally shifting the time horizon in which they make their current day investing decisions between different points of time in the future, which to Shiller, seemed like irrational behavior.

Next week, we'll roll our spaghetti forecast chart of the quantum trajectories the S&P 500 might take depending upon which point in the future investors fix their attention upon forward through the end of the fourth quarter of 2019. For this edition of our S&P 500 chaos series, it made sense to look backward at 2019-Q3 one last time....