Political Calculations
Unexpectedly Intriguing!
22 November 2019
How Much Will Impeachment Cost the Economy?

How much will the impeachment drama on Capitol Hill cost the U.S. economy?


We're always skeptical whenever we see estimates of how much a particular non-work-related activity costs businesses from lost productivity because workers are too distracted to do their jobs in the news, whether it be related to the Super Bowl, the World Cup, March Madness, or some other broadcast event, but for the first time, we've seen a report that describes how one of these estimates has come about. In this case, the context is the televised impeachment inquiry taking place in the U.S. House of Representatives, which might as well be its own category of sporting event.

Millions of Americans tuned in yesterday to watch the beginning of the impeachment hearings against President Trump — many of them while they were at work. And according to an estimate by outplacement firm Challenger, Gray & Christmas, that’s costing American businesses roughly $2.1 billion per hour in lost productivity.

That back-of-the-envelope math provides the basis for our latest tool, which is built to calculate both the lost productivity per hour and the total lost productivity to the U.S. economy over a given number of workdays. Best of all, the tool may be adapted to the cost of lost productivity for any given event, not just impeachment proceedings, or in any country, not just the United States, so the tool is not limited to that special case. If you're accessing this article on a site that republishes our RSS news feed, please click through to our site to access a working version of the tool.

For our default analysis, since the broadcast impeachment hearings in the House are relatively new and just getting underway, we've instead used data that applies to the Mueller investigation of alleged Russian collusion with the 2016 Trump presidential campaign to estimate the total cost of lost productivity in American workplaces from that protracted political affair, but you're welcome to substitute data that applies to the similar political event of the Trump impeachment inquiry as it progresses.

Here, 547 work days passed between the time a special counsel named Robert Mueller was appointed to run an investigation into Russia's potential involvement with President Trump's successful 2016 political campaign on 17 May 2017 to the time it fizzled out with his final testimony on the investigation before the U.S. Congress on 24 July 2019. Assuming working Americans spent an average of one hour per workday talking about the Mueller investigation while on the job as it was regularly in the news, the politically-charged probe would have cost the U.S. economy an estimated $1.1 trillion in lost productivity during this period.

Let's say all of that lost productivity would have otherwise added to the U.S. economy's gross domestic product if not for what ultimately amounted to be a long-running sideshow distraction. Using GDP data accessed on 15 November 2019 for the period 2017-Q2 through 2019-Q2, we find the nation's nominal GDP rose from $19.357 trillion to $21.340 trillion over this two year long period approximately coinciding with the duration of the so-called "Russian Collusion" investigation, an average annualized growth rate of 5.0% (or 2.7% if we use the BEA's inflation-adjusted GDP figures for these quarters).

Boosting 2019-Q2's nominal GDP by $1.1 trillion to account for the productivity allegedly lost to workplace discussions about the Mueller investigation to $22.44 trillion increases the average annualized GDP growth rate during this two year period to 7.7% (or 5.4% in 'real' terms).

Is that figure realistic? We would say probably not, because it's simply too much money for serious businesses to tolerate losing without their bosses staging an intervention to refocus employees on doing their jobs by taking corrective action to minimize unproductive politics-related chatter at work. 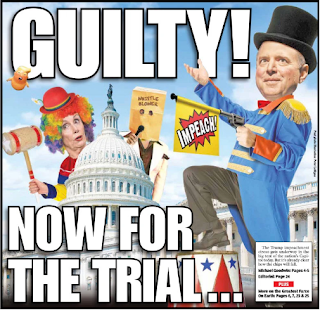 On the other hand, for businesses with non-serious bosses, it probably has resulted in major losses in both productivity and quality. For example, just consider how much time late night comedy talk shows have spent on politically-related topics during the last several years and how unfunny they've become as a result, and you can see the damage the corrosiveness of political obsessions has caused every weeknight. And that's with Donald Trump as President of the United States, which by all rights has got to be a comedy gold mine!

Then there's the least serious business of all, which goes on in the U.S. Congress, where politicians seem incapable of doing anything else as congressional bosses have chosen to put their political sideshows up front and center, ahead of useful things like passing spending bills to avoid government agency shutdowns, approving trade deals, et cetera. Nearly a year into its tenure, with both the Mueller investigation and now the impeachment inquiry distracting it, the 116th session of Congress is currently at risk of becoming the least productive in history.

We're on the cusp of the Thanksgiving holiday here in the United States, where many Americans can soon expect have to deal with their politically-obsessed family members at their dining table. If this year's dinner is at your house, be the serious boss and put the kibosh on entering the social disaster minefield that you will otherwise find yourself in if you're foolish enough to allow their political obsessions to dominate and ruin the experience of your Thanksgiving feast. If need be, you might consider putting your politically-obsessed guests in their proper place. At the kids' table.

Update 15 December 2019: We were wrong about treating the Mueller investigation a separate event from the House's impeachment inquiry. That's according to House of Representatives Speaker Nancy Pelosi, who confirms the House's current impeachment effort began with Robert Mueller's appointment to lead the investigation that bears his name:

Democrats showed signs of unity Tuesday after Speaker Nancy Pelosi and the committee chairs announced the plan to proceed with just two articles of impeachment.

Pelosi declined to explain why Democrats opted not to pursue an obstruction of justice article of impeachment encompassing the special counsel’s findings.

“It’s no use talking about what isn’t. This is what is,” she said Tuesday Morning at Politico’s Women Rule Summit.

Yet, Pelosi invoked the appointment of Robert S. Mueller to lead the special counsel investigation as the start of the impeachment process when defending claims that Democrats have rushed the process.

“Speed? It’s been going on for 22 months, two and a half years actually,” she said.

And there you have it. To update our tool, you just need to enter the number of workdays that have passed since the Mueller investigation began, which you can easily get from TimeAndDate's business days calculator by entering 17 May 2017 as the start date and whatever date you would like to update it through as the end date. Through mid-December 2019, we are at 646 elapsed workdays and counting.