Picking up the action from last Thursday, 2 April 2020, we find that expectations for future dividends in the S&P 500 (Index: SPX) continued to deteriorate through the end of 2020. 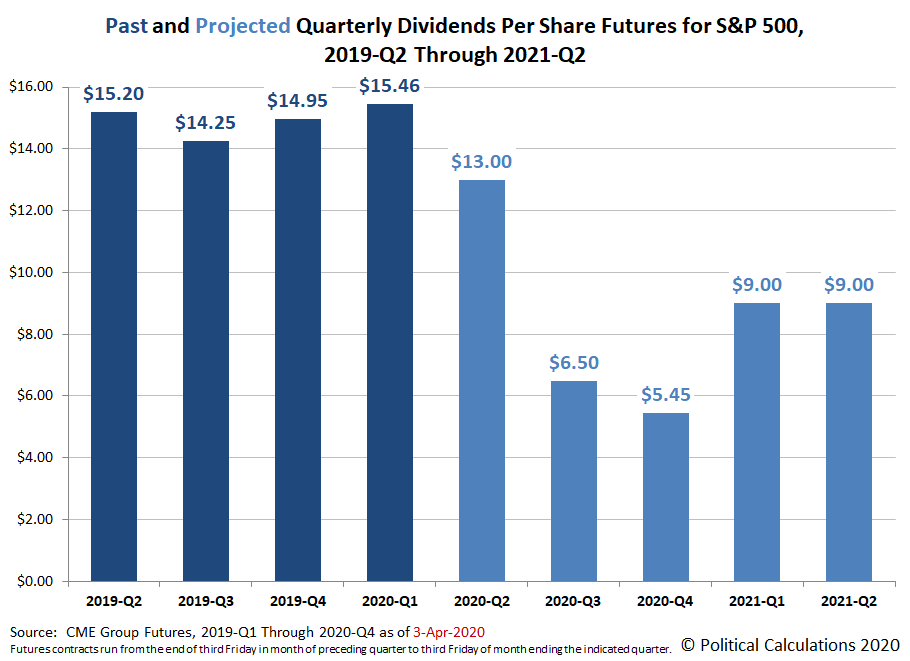 The futures data is suggesting that while dividend reductions have begun to be announced, investors are still expecting many firms to pay out a good portion of the cash they've been setting aside for their 2020-Q2 dividends before suspending them for the rest of 2020, before perhaps resuming a portion of them in early 2021.

At the same time, we're catching up with what may have been a regime change for how investors are weighting the changes they expect in the growth rate of dividends per share, which appears to have taken hold in the stock market beginning on Monday, 23 March 2020. We'll discuss our thinking more on this topic later this week, but for now, we've updated the alternative futures spaghetti forecast chart to show the effect of that potential change. 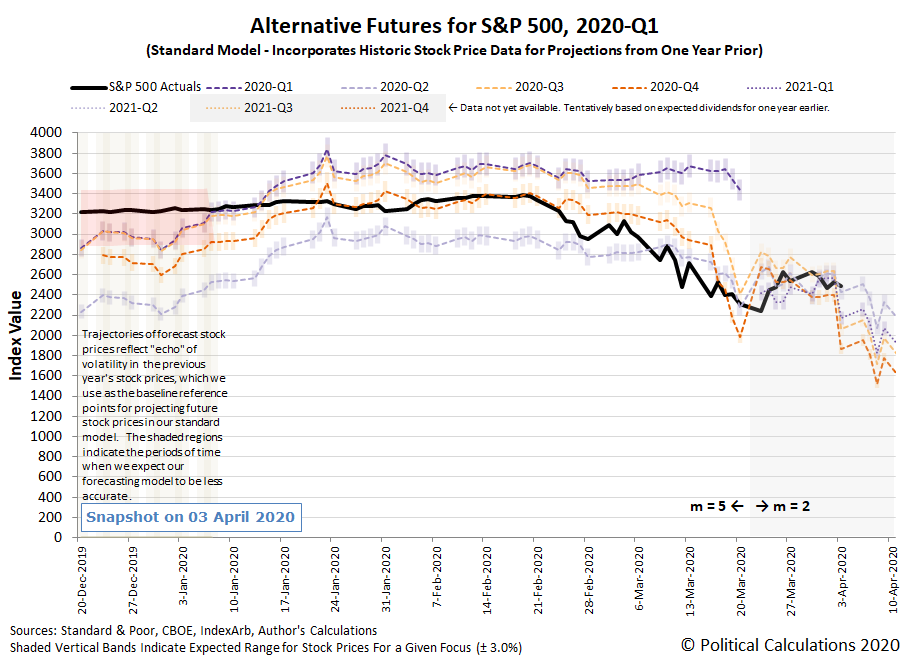 Meanwhile, Barry Ritholtz forcefully extracted the positives and negatives he could find in the past week's economics and market-related news.

If you're accessing this article on a site that republishes our RSS news feed, since we've been appending daily updates to our regular weekly analysis in our S&P 500 chaos series during the market's current period of heightened volatility, you may want to follow this link to catch up with the latest!

Update 6:30 PM Eastern: Lots of positive news came out today, with the biggest story being that the situation with coronavirus epidemic improving in the hardest hit places in both Europe and in the U.S., where the U.S.' primary financial center New York City has been very much at the center of the greatest concentration of COVID-19 infections in the country. That, plus some additional Fed relief for companies seeking cash and the Japanese government's commitment to a 20% of its GDP stimulus package sent stock prices around the world upward on the day. 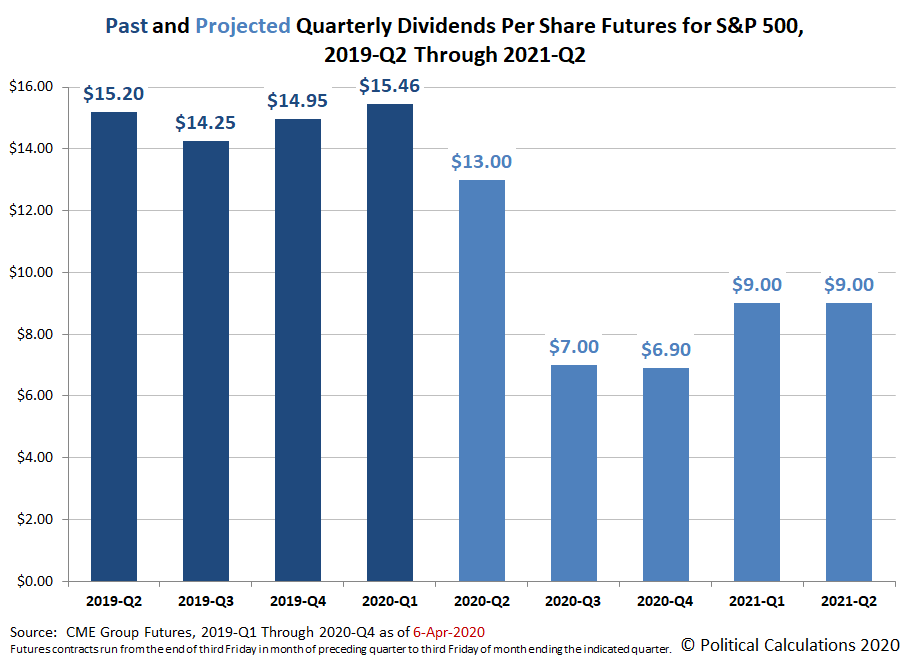 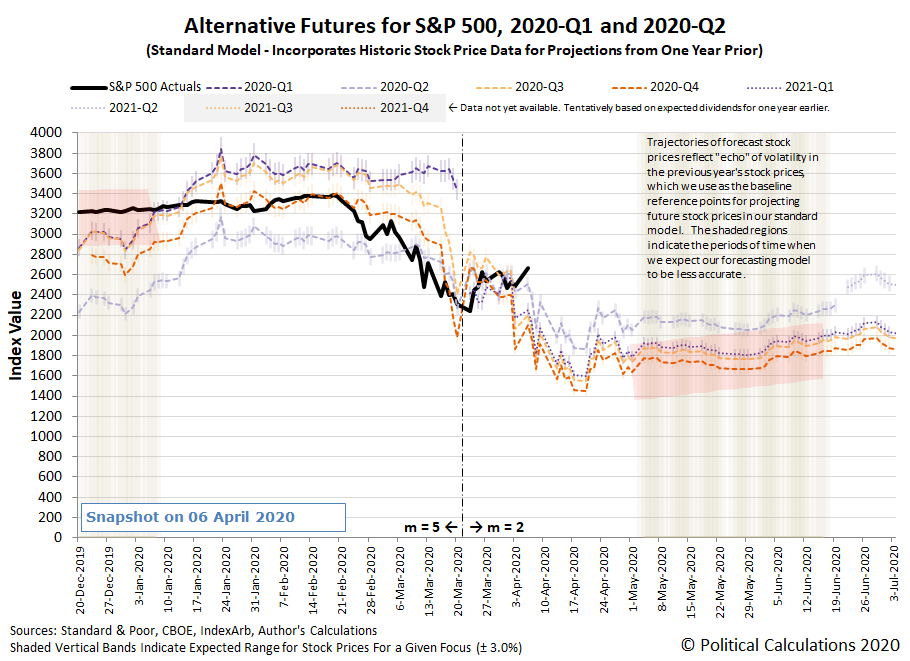 With some luck, perhaps the start of a good trend, though we don't think anyone yet fully appreciates the full extent of the impact to the world's economies, which we suspect will be reeling for some time.

Update 7 April 2020, 5:00 PM Eastern: The S&P 500 went through a pretty wide swing today, going from a several percentage point gain to closing down by 0.16% to finish the day at 2,659.41, as it was pulled lower by a drop in oil prices that sent that sector of the market down sharply.

On the other hand, expectations for future dividends in the latter half of 2020 improved, but that may not be fully reflecting what happened in the global oil market today.... 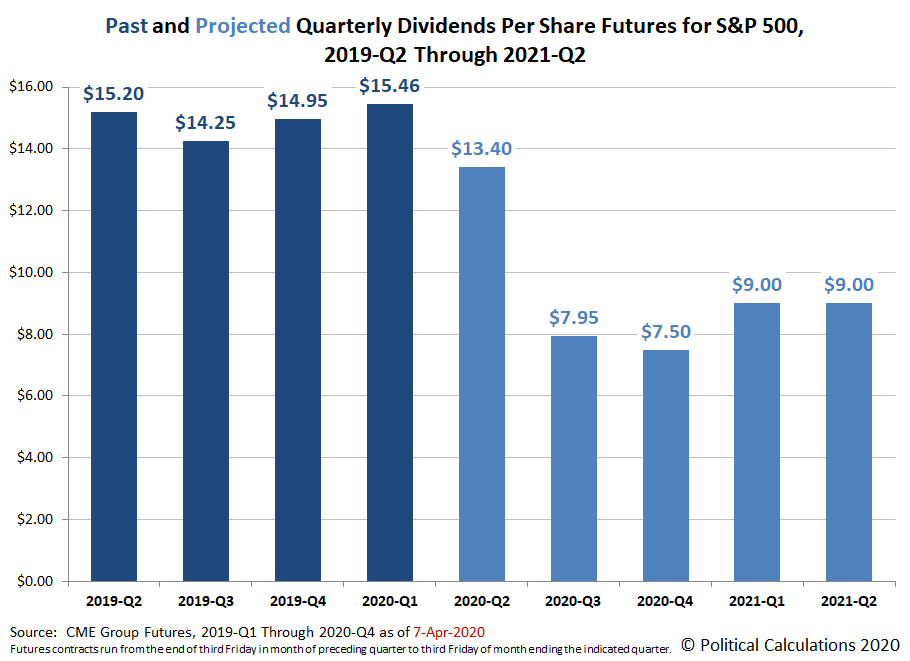 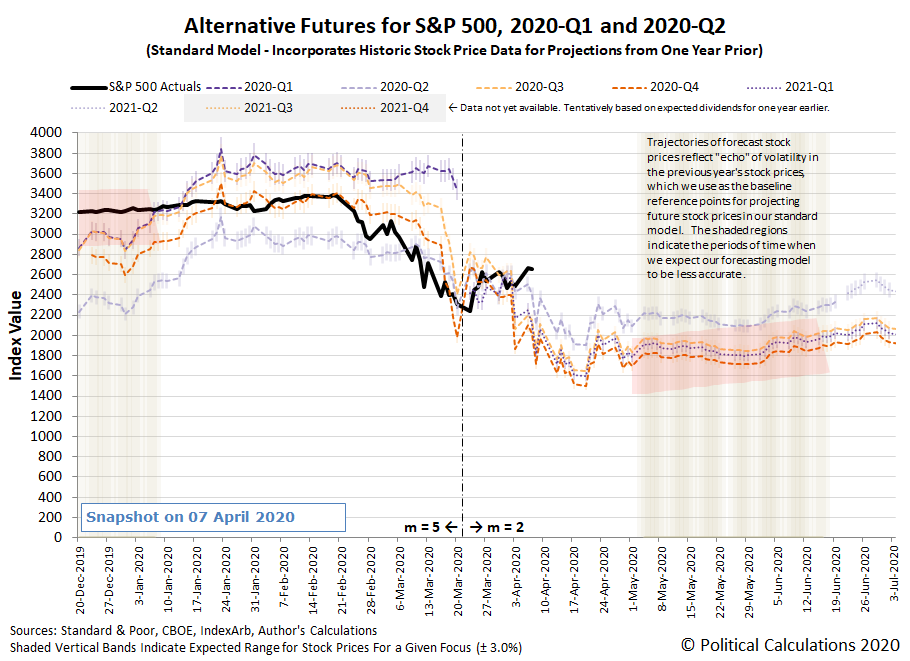 In other news, the coronavirus pandemic looks like it will next be hitting Japan fairly hard, with that nation's prime minister declaring a state of emergency, which means lockdowns won't be far behind.

Dividend futures for each of the quarters in 2020 were also up today, but not by enough to explain the rise in stock prices as confirmed by the day's update to the alternative futures chart. 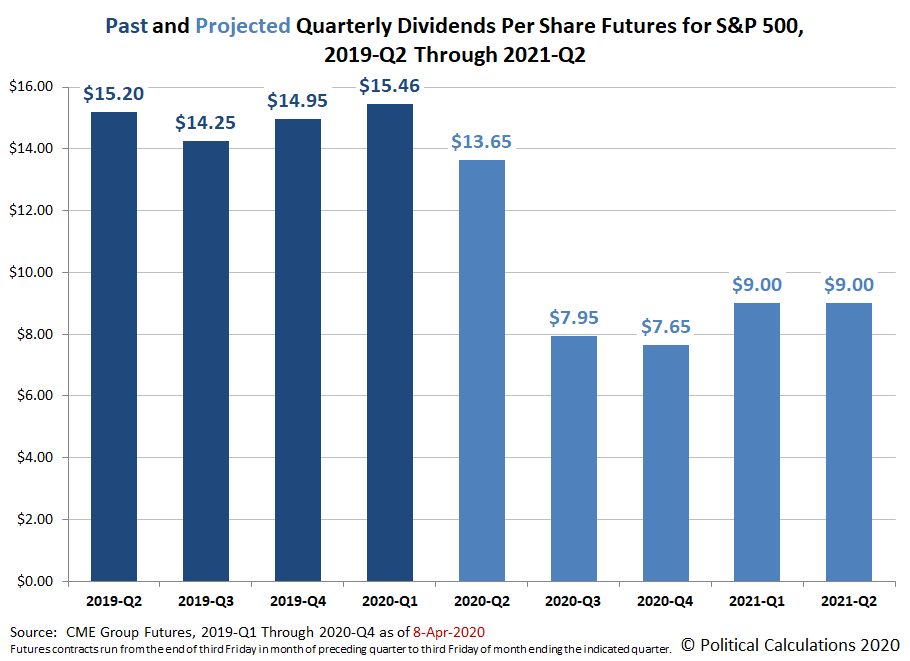 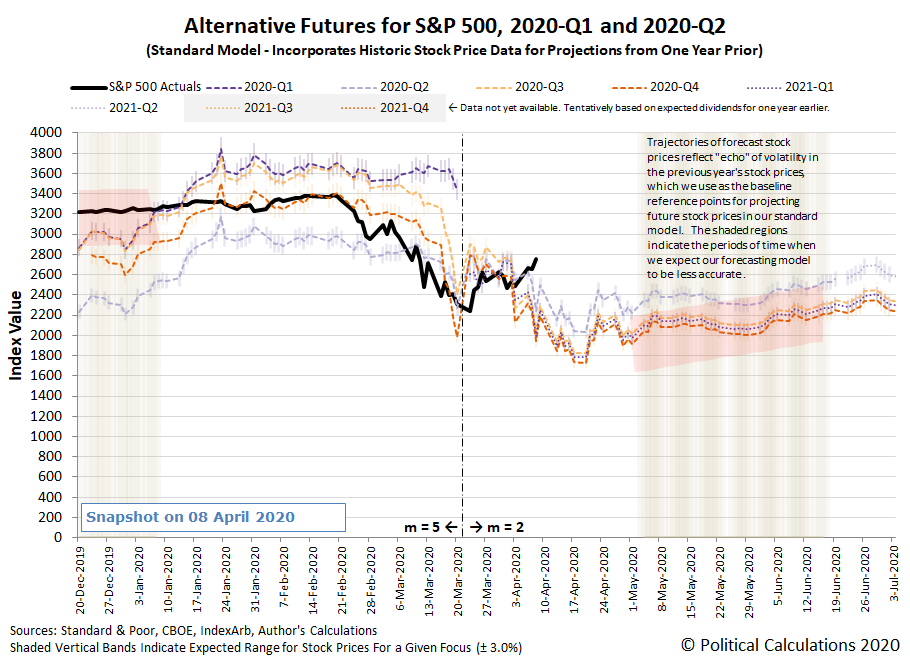 But are we applying the right amplification factor for the S&P 500 since 20 March 2020? We'll explore that question soon!

Update 9 April 2020, 6:30 PM Eastern: If you were doubting the Fed could go any further in its efforts to revive the U.S. economy from the coronavirus recession, you were sadly disappointed today. With the Fed announcing plans to expand its relief efforts to cover businesses with less-than-stellar credit ratings and to expand its backing to non-bank lenders, and developing plans to do more to back main street businesses, Wall Street responded positively to the news. At the same time, the Trump administration began looking past the immediate health crisis to develop plans to restart the U.S. economy, which also provided additional boost.

Together, that news combined to boost both dividend futures, which saw their biggest increase today as the Fed's and Trump administration's actions will help limit the greater reductions investors were fearing. At the same time, the S&P 500 rose 1.45% on a moderate rebound in volume to close the week at 2,789.82. Both are shown in the chart below, and following our discussion of "what is m?", we're showing m = 1.5 beginning 23 March 2020, where it appears this amplification factor has been ranging between 0.8 and 2.0 during these last three trading weeks.

Dividend futures for each of the quarters in 2020 were also up today, but not by enough to explain the rise in stock prices as confirmed by the day's update to the alternative futures chart. 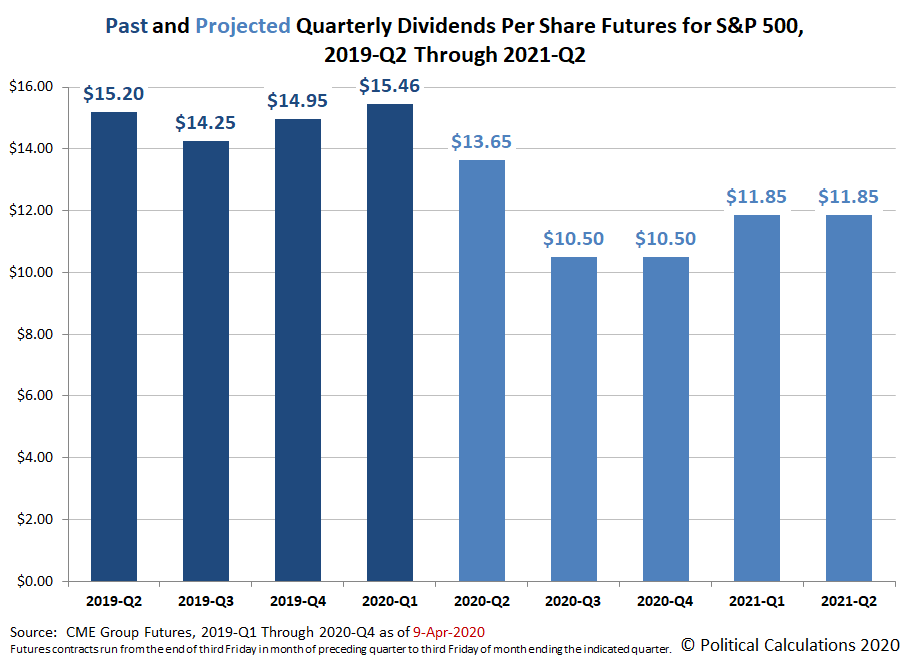 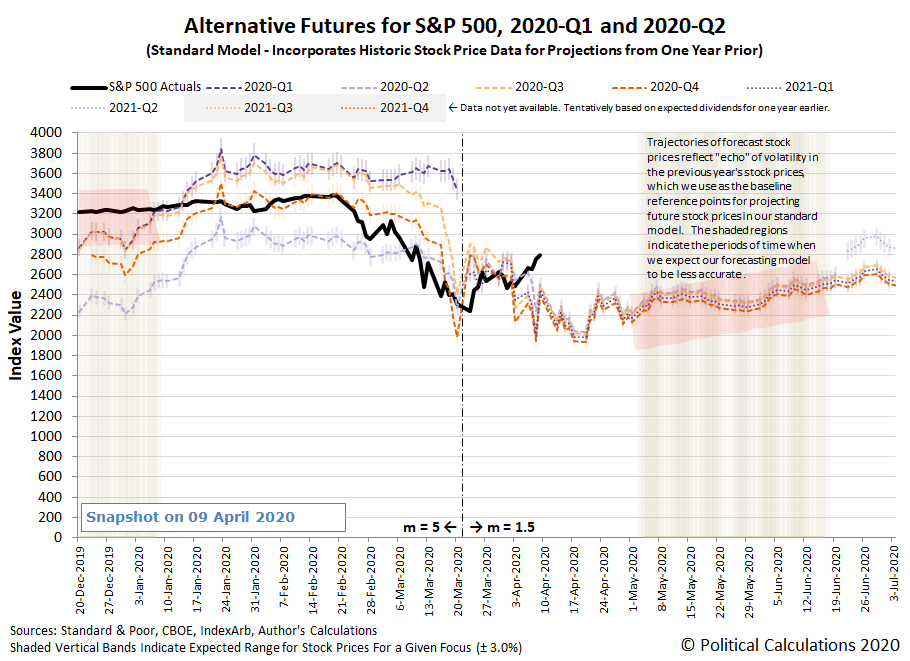 All in all, it was a strong end for the week. With the market closed for the Good Friday holiday tomorrow, we'll be taking an extended weekend after a month of craziness.