Political Calculations
Unexpectedly Intriguing!
May 18, 2020
Did Prospects of Negative Interest Rates Create The Upside Market for the S&P 500?

Why has the S&P 500's (Index: SPX) amplification factor turned negative after more than a decade of being virtually constant?

It didn't happen all at once. It has happened in stages, coinciding with significant changes in the Federal Reserve's monetary policies in response to the coronavirus recession. Those actions have created today's upside down market environment, where stock prices keep rising even though market fundamentals, the things that typically drive changes in stock prices, have been crashing.

The trading week ending on 15 May 2020 provided some insight into why that is, which saw the trajectory of the S&P 500 nearly break out of the redzone forecast range we've been tracking on the alternative futures forecast chart. 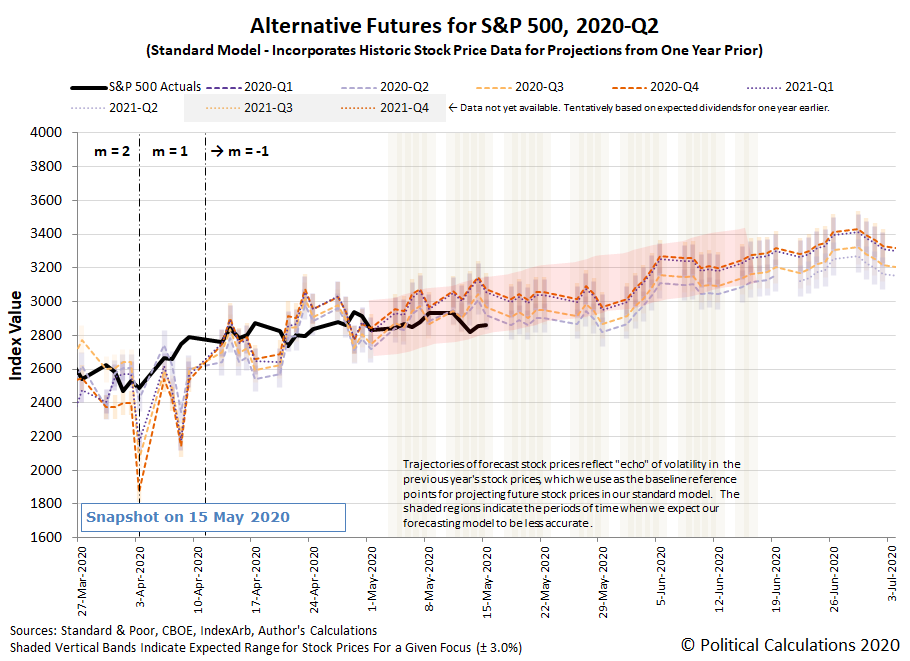 The near breakout took place from Tuesday, 12 May 2020 through Thursday, 14 May 2020, where the first two days of that period saw an unusual amount of activity by Fed officials seeking to put the kibosh on expectations the central bank would adopt negative interest rates in the U.S. Stock prices fell on the weight of those expectations, as value of m, the amplification factor in the dividend futures-based model we use to forecast the S&P 500, became slightly less negative.

On Thursday, bond market vigilantes staged a rebellion against the Fed, increasing their bets the central bank will be forced to adopt the policy, with the result of stock prices rising and the value of m drifting back toward a value of -1.

The response of stock prices to this interest rate policy-related stream of new information has been informative, because it gives the basis for a new hypothesis for why the world seems to have turned upside for U.S. stock prices. Increased expectations the Fed will adopt negative interest rates could explain why the sign of the amplification factor has become negative, where we could soon get a test of this new hypothesis, thanks to Federal Reserve Chair Jerome Powell's 60 Minutes interview on Sunday, 17 May 2020. Here's an extended excerpt from the transcript of the interview:

PELLEY: In the early days of the crisis in this boardroom, you and the committee lowered interest rates essentially to zero. Would you lower them further into negative territory, which the president has suggested is a good idea?

POWELL: So around this table during the last crisis and during the recovery, we looked at negative interest rates. And it's something we decided not to do. We used other tools instead. And those tools involved forward guidance about the federal funds rate and also lots of asset purchases or quantitative easing as it's often referred to.

I continue to think, and my colleagues on the Federal Open Market Committee continue to think that negative interest rates is probably not an appropriate or useful policy for us here in the United States.

PELLEY: And why not? The President seems to think it would help.

POWELL: The evidence on whether it helps is quite mixed. And the issue is people would be depositing money in the bank and that money would be shrinking. They'd be paying interest to put their money in the bank. So it's not a particularly popular policy, as you can imagine.

But in addition, it can also tend to depress the profitability of banks, which makes them likely to lend less, which weighs on economic growth. So I would just say it's not at all settled in, you know, in economic analysis that negative rates really add much value.

PELLEY: I think the idea of negative interest rates is something that a lot of people have a difficult time getting their head around. Would you explain it to me?

POWELL: Well, rather than being paid interest on your cash, you pay interest to the bank -- or if you borrow money, they pay you to borrow money. And if you lend them money by putting it in a bank, then they pay you money.

PELLEY: So the banks would pay people to borrow money, essentially?

PELLEY: And that would conceivably cause more business and commerce to happen?

POWELL: It would. But, you know, this has been tried. We have negative policy rates in many countries around the world as a result of the financial crisis. And there's no clear finding that it actually does support economic activity on net. And it introduces distortions into the financial system, which I think offset that.

There're plenty of people who think negative interest rates are a good policy. But we don't really think so at the Federal Reserve. And I think it's an area of real uncertainty in the central banking world.

Today's upside down stock market may be an example of the kind of distortions that Powell is describing. And yet, when you consider how many Americans have investments in the stock market through their retirement accounts or through pension funds, a collapse in stock prices that might result if the prospect of negative rates is completely taken off the table could be devastating, not just for the stock market but for the economy, because it could trigger a new wave of contraction. It's not likely that many people would consider that kind of potential outcome to be a good thing.

That's a very fine line to try to walk, where we don't envy Fed Chair Powell. It is far easier for a Fed chief to follow the market than it is to lead it, because the latter puts the Fed's credibility on the line, which has larger consequences. The first test of how effectively he made his case against negative rates could come in this upcoming week, where it will add to the endless, random onset of new information for investors to consider.

Meanwhile, here are the market-moving headlines we noted during the week that was.

Elsewhere, Barry Ritholtz has scanned the week's markets and economy-related news and divided it up into the categories of positives and negatives.

In addition to the surge in stock prices, dividends futures for 2020-Q3 also bounced up - at least during intraday trading, as shown in the first chart below: 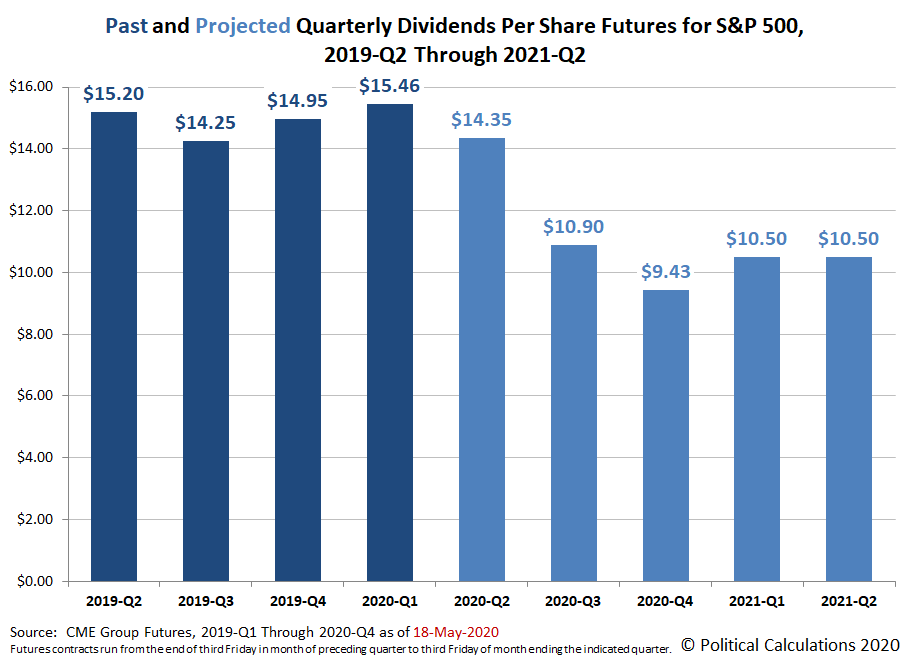 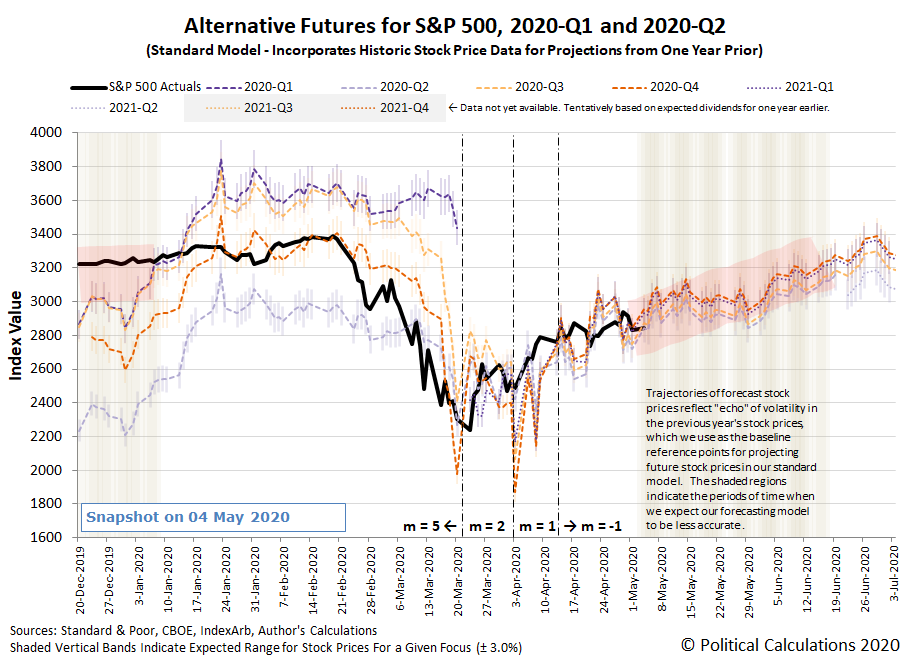 Stock prices don't levitate themselves! Yet, the question of how long the Fed can keep the gravity-defying levitation going remains open....