There was exactly one big story driving the action for the S&P 500 (Index: SPX) in the final week of February 2021. Incoming data suggested the specter of inflation is not as distant as had been assumed. With its appearance, investors who had hedged their bond investments by buying stocks were shocked into selling to cover their losses as real interest rates for the 10-year U.S. Treasury rose above 1.5%.

For the S&P 500, although stock prices saw considerable volatility during the week, investors appeared to largely maintain their forward-looking focus on 2021-Q2, with the index' level remaining within the redzone forecast range we described in our previous update. 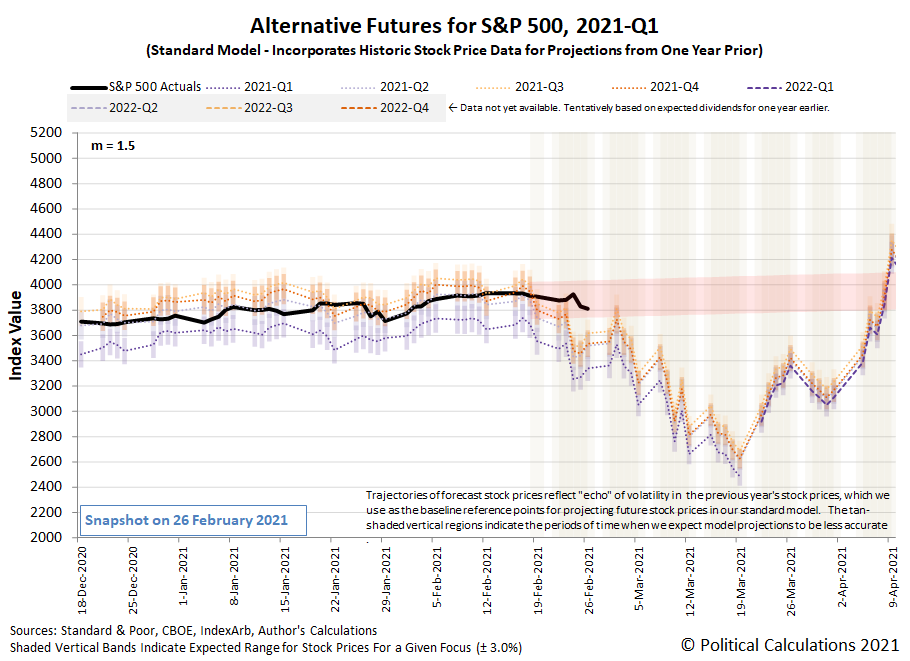 The new volatility does raise an interesting question for our redzone forecast. What would it mean if the level of the S&P 500 moved outside of the indicated range?

From our perspective, all that means is that circumstances have overridden the assumptions we made when we established it. As shown, it is based on the premise that investors would be focused on 2021-Q2 in setting current day stock prices in the early period covered by the redzone forecast, where they would transition to focusing on the more distant future quarter of 2021-Q4 sometime after March 2021.

But, a shock event like the bond market's 'tantrum without a taper' could compel investors to shift their focus to a different point of time in the future. At present, assuming no change in the expectations for future dividends, the worst case would be if investors shifted their focus to the current quarter of 2021-Q1, where they would be watching for the Federal Reserve's response to the bond market's 'tantrum' within this quarter. If that happened, stock prices could fall on the order of somewhere between 200-300 points. In the alternative futures chart, we would see the level of the S&P 500 drop below the redzone forecast range.

If investor expectations for future dividends change on top of that, then level to which the S&P 500 might go in that scenario would be affected to the extent those expectations change. We would see that change through the changing levels of the dividend futures-based model's alternative projections of where the S&P 500's level would be for when investors focus on particular points of time in the future.

The behavior of stock prices is complex, but not difficult to sort out if you have the right framework for understanding why they behave as they do. Regardless, the one thing that will determine how they behave in the immediate future in the random onset of new information. Speaking of which, here is our summary of the previous week's newsflow of market-moving headlines, which provides a good potion of the context needed to understand what new information investors were absorbing during the most volatile week for markets in months.

Meanwhile, Barry Ritholtz lists the positives and negatives he found in the past week's economics and markets news.