The S&P 500 (Index: SPX) continued to experience a series of small Lévy flight events as the index see-sawed back and forth during the first week of December 2021.

The alternative futures chart shows that heightened volatility, which came as the onset of new information prompted investors to shift their forward-looking focus back and forth between 2021-Q4/2022-Q1 and 2022-Q2. 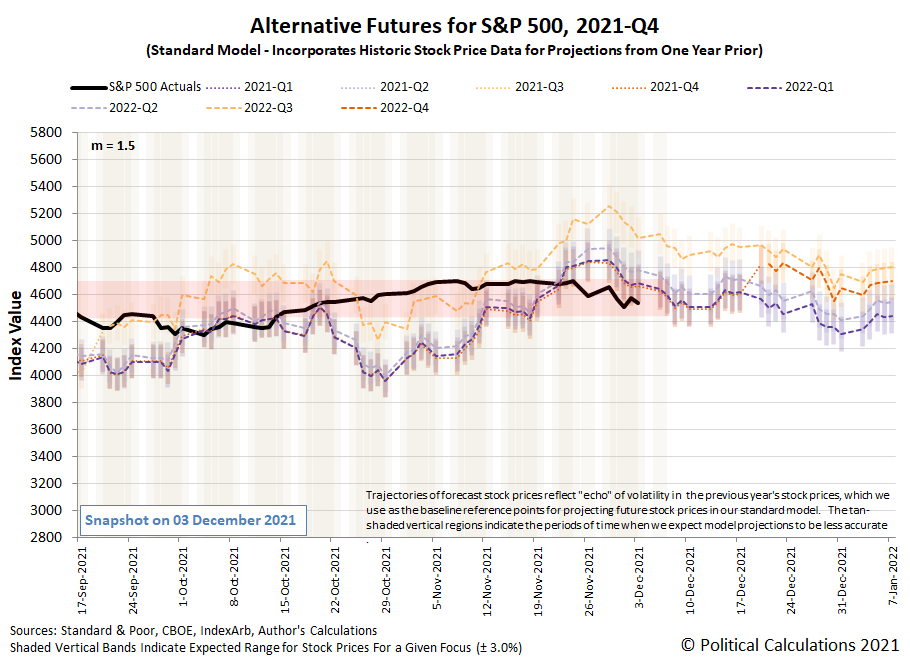 During this week, upward movements were associated with investors shifting their attention toward 2022-Q2, while downward movements were associated with investors focusing on 2021-Q4/2022-Q1. The upward shifts toward the more distant future were prompted by news of government responses to the apparently fast-spreading Omicron variant of the SARS-CoV-2 coronavirus, which would coincide with the Fed holding off its newly plan to accelerate the tapering of its stimulus bond buys. The downward shifts toward the nearer term future was prompted by statements by Federal Reserve officials indicating they would accelerate their plan to slow their purchases of U.S. government-issued bonds to stimulate the economy and hike short term interest rates sooner to fight inflation. Here's QTR's Fringe Finance's take on the resulting volatility:

It is astounding to me how much market commentary I have seen over the last 48 hours placing blame for the market “volatility” (read: 2% off all time highs) on the Omicron variant....

While there are definitely still some uncertainties about the new variant, early indications make it look as though it is not going to be meaningfully deadlier than other variants and that, one way or the other, we will be able to deal with Omicron and see our way through it - just as we did with the Delta variant. That is, unless the government implements more of what one trader calls a “criminal” response to Covid and issues more lockdowns and mandates.

While Omicron uncertainty has likely contributed slightly to market volatility, I don’t think it is the driving force behind it. Rather, I believe that current volatility is a result of Jerome Powell’s surprising, and so far unrelenting, hawkish stance that a taper and rate hikes look to be necessary.

In fact, several Fed governors have commented over the last 48 hours about potentially accelerating both rate hikes and tapering. This language, as I noted days ago, is an admission that the Fed has lost control of inflation.

In fact, it looks as though inflation has gotten so bad that the Fed is going to have to try and attempt to “stick the landing” of presenting hurried tapering and rate hike plans to the market. Of course, the Fed won’t really be able to stick the landing on either because politicians on the left and castrated on-air finance personalities will cry foul as soon as the market has a 10% pullback as a result of higher rates (just as they did on the Covid crash).

But for now, the company line is that we are going ahead with rate hikes and looking to accelerate the taper. This - not the Omicron variant - is what is moving markets.

We thought that was an interesting take on the market-moving news of the week that was. Here are the headlines that stood out to us: