What Is Your World Income Percentile Ranking?

Where do you rank in terms of the Earth's distribution of income?

To estimate where your personal income percentile falls on the world's income spectrum, all you need is to indicate your nationality and your annual income in terms of your country's currency. Our tool will convert your income to be in terms of international U.S. dollars, which represents U.S. dollars adjusted for their purchasing price parity for the selected nation, which we'll then use to approximate your world individual income percentile.

It all starts in the tool below! If you're accessing this article on a site that republishes our RSS news feed, please click here to access a working version of the tool at our site.

Meanwhile, if you're a visual person, you could find your equivalent income in terms of U.S. dollars in the following chart and approximate your world income percentile from the vertical scale. 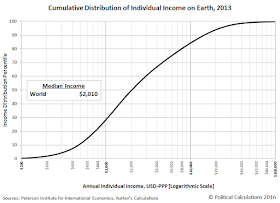 Our tool's estimate of your world income percentile is based on data for the global distribution of income for 2013, which is the most current year for which we have the data. Meanwhile, our conversion of your entered income to be in terms of international U.S. dollars is based on the World Bank's estimates of the purchasing power parity of your selected nation's currency with respect to U.S. dollars in 2013.

Unless your selected nation has experienced significant hyperinflation, your results should be reasonably close to where you fall on the income percentile spectrum at this writing in 2016. Because of that factor, we have omitted two countries that have experienced severe hyperinflation in recent years from our list, Venezuela and Zimbabwe, since entering a current income for those countries would produce results that differ greatly from incomes that applied back in 2013.

Depending on your selected nation's inflation in the years since 2013, a similar situation may apply, so keep that in mind while using this tool.