Update: Welcome Carnival of the Capitalists!

I should probably credit (or blame) James Burke for his influence upon my outlook, but in recently looking at the historical data and the future projections for the value of the assets held by Social Security's Old Age and Survivors and Disability Insurance (OASDI) Trust Fund, I was struck by a pattern I recognized in the data. Here is the information from the tables linked above presented in graphical format for the years under which the OASI tax rate component of Social Security taxes, or rather, the portion of Social Security taxes dedicated to providing pension and survivor's insurance benefits, is maintained at a rate of 10.6% [the OASI tax rate data is provided in this 266KB PDF document from the Railroad Retirement Board]: 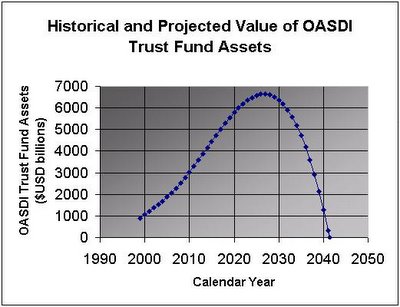 The pattern I recognized in the data, which appears from the mid-to-late-1990s onward as a long and steady ramp upward that levels off as it reaches a peak followed by a rapid descent, would be immediately apparent to any engineer, physics student, artillery gunner, or the players and fans of football, baseball or golf - it's the trajectory (or flight path) of a projectile (like a ball) moving through a viscous (drag-inducing) medium (such as air):

Projectile Motion of a Cannonball with Drag

Recognizing this similarity, the question then becomes "how realistic is this analogy?" Before I go further, let's illustrate the basic forces acting on a projectile in flight and compare them to the equivalent economic and demographic forces acting upon the Social Security OASDI Trust Fund:

Equivalence Between Projectile and Economic/Demographic Forces

So how does this scenario match up with history? Look at it this way - in 1983, the U.S. government recognized that the Social Security system, as it was then, would not be capable of meeting the retirement needs of the baby-boom generation without substantial cuts in promised retirement benefits. So, the government passed legislation that changed Social Security from a purely "pay-as-you-go" system, where nearly every dollar collected was almost immediately paid back out in the form of retirement benefits, into a system that would accumulate a substantial surplus in the OASDI Trust Fund for the purpose of supporting the future retirement of the baby-boom generation. Beginning in 1984, every affected income earner in the U.S. had their Social Security OASI tax rate increased from 7.11% to 10.4%. This tax rate peaked in 1990 through 1992 at 11.2% and has since settled at a level rate of 10.6%.

In effect, the U.S. government reared back and threw a forward pass with the upward component of thrust provided by the increase in the Social Security tax rate and the forward component of thrust provided by the number of Social Security taxpayers in the U.S. work force. Unfortunately, the quarterbacks of that era didn't recognize that the opposing force of demographics in the form of a significantly increasing number of beneficiaries who would be living longer combined with the gravitational pull of automatically increasing benefit payments would cause the pass to fall short, now forecast to crash to earth in 2042.

Now the question becomes "can we do anything practical with this analogy?" I think the answer is: maybe. It seems to me that the real goal in reforming the Social Security system is to keep the ball from hitting the ground, so to speak. The proposed reforms that are put forward have to demonstrate that they will not permanently deplete the OASDI Trust Fund, since this fund represents the ability of Social Security to continue providing promised levels of benefits into the future. Metaphorically speaking, the program reformers will need to intercept the ball in mid-flight and relaunch it to provide for the program's long-term stability and sustainability. The "forces" acting on the ball would represent the means by which its trajectory may be altered through actuarial means, such as tax rate increases, cuts in promised benefits, increasing the age of retirement, changing the amount of income that may be taxed, etc. As it stands, I just think its cool that I'm finally getting some mileage out of my old Physics textbook.

Update: PrestoPundit notes another convergence between economics and physics.

Update: If you prefer economic metaphors of the fluid flow/water-tank variety, see Fred Cederholm's contribution at the Baltimore Chronicle.