Want to know what's wrong with your business card? This guy will tell you (HT: Core77):

And yet, as impressive as he tries to make it sound, he doesn't take his own business card to the next level. We give you Meat Cards. Business cards made from meat. And lasers:

We start with 100% beef jerky, and SEAR your contact information into it with a 150 WATT CO2 LASER.

Unlike other business cards, MEAT CARDS will retain value after the econopocalypse. Hoard and barter your calorie-rich, life-sustaining cards.

MEAT CARDS do not fit in a Rolodex, because their deliciousness CANNOT BE CONTAINED in a Rolodex.

29 June 2009
A New Correlation Between Unemployment and Foreclosures? 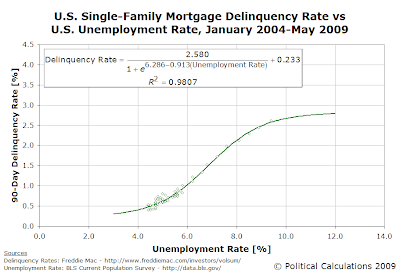 Whenever we see that kind of apparently close correlation, we go the extra mile and try to map out the relationship that would appear to exist between the two factors. We've presented our chart showing the correlation between the U.S. unemployment rate and the U.S. single-family mortgage 90-day delinquency rate to the left (larger version near the bottom of this post.) What's more, we've also created a tool for projecting the foreclosure rate from the U.S. unemployment rate based on the data as it's behaved since January 2004.

Running the numbers for an unemployment rate of 10%, we find that we might expect the single-family mortgage delinquency rate to increase to a level around 2.7% of all mortgages, based upon the correlation we observe in the data that appears to have existed since 2004.

The problem is that correlation between the U.S. unemployment rate and the percentage of mortgage delinquencies would appear to be something new.

We find that to be the case in an 1998 working paper from the Federal Reserve by Peter J. Elmer and Steven A. Seelig The Rising Long-Term Trend of Single-Family Mortgage Foreclosure Rates. Here, Elmer and Seelig considered the relationship between the unemployment rate and the rate of mortgage foreclosures in the United States from 1950 into 1998. 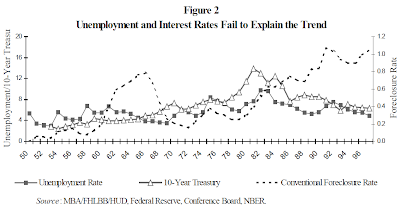 They found that, contrary to the pattern we observe today and to what people might reasonably expect, that there was no real correlation between changes in the rate of U.S. unemployment and the rate of mortgage foreclosures. The chart to the right graphically presents both rates, along with the 10-year Treasury yield for reference. [Note: We've previously featured a tool that predicts 30-year conventional mortgage rates given the 10-year U.S. Treasury yield.]

Throughout much of the late twentieth century, mortgage lenders required homebuyers to invest significant equity in their properties, requiring substantial down payments at the time of purchase. Often representing 20% of the market value of the homes being bought, this equity stake helped insulate the mortgage lenders from the employment status of the homebuyers.

Likewise, the homebuyers were in part insulated from having their home foreclosed upon during such periods of unemployment thanks to this margin of safety. They could draw upon their home equity, either through taking out home equity loans or by selling their homes, to avoid the fiscal calamity of foreclosure.

But, beginning in the 1990s, the systematic erosion of such lending standards also led to the elimination of this safety margin. As a result, the margin of safety for significant numbers of mortgages shrank, exposing both lender and borrower to an increased risk of foreclosure in the event the borrower became unemployed.

But we believe that will end, given that we see that the rate of mortgage delinquencies appears to already be slowing, even as the unemployment rate increases.

Running the numbers for higher levels of unemployment suggests that as the unemployment rate increases, the percentage of mortgage delinquencies will peak around 2.8%. Intuitively, we believe that makes sense since we would expect that as the substantial already number of foreclosed properties are sold to new buyers who are being held to higher lending standards, the loans represented by these properties will move from the numerator to the denominator in the calculation of the delinquency rate.

Consequently, we would anticipate that the apparent correlation we are currently observing between the U.S. unemployment rate and the delinquency rate of single-family mortgages will break down, even if unemployment rates continue to rise.

We obtained the monthly unemployment rate data for the U.S. from the BLS' Current Population Survey database. Meanwhile, we obtained the corresponding monthly single-family 90-day delinquency rate for all mortgages spanning January 2004 through May 2009 from the following Freddie Mac reports for the indicated years:

Welcome to the Saturday, June 27, 2009 edition of On the Moneyed Midways, the one place you can count on each week to bring you the best of what we found in the world of business and money-related blog carnivals!

Of course, our "special" editions are in no way really distinguishable from our "regular" editions, but it sure sounds a lot better than "late!"

But we're late enough as it is, so let's get onto the best posts we found in the week that was!..." 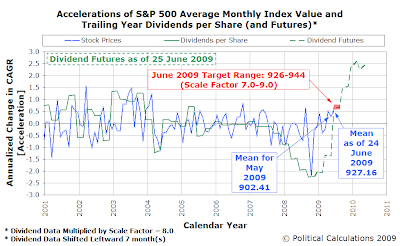 Assuming something really wacky doesn't happen on 30 June 2009, we would expect the S&P 500 will turn in an average value for the month somewhere close to the range between 926 and 944.

That's not a bold statement, given that the current average for the month through 24 June 2009 stands at 927.16, but we do anticipate that most of the downward noisy volatility in stock prices associated with the quadruple witching expiration of options last week is largely over and that, absent any disruptive events, we should expect stock prices to slowly rise from their 900.21 closing value recorded on 24 June 2009.

We base that outlook on our math using the following observations:

Have you ever wanted to test out an investing strategy using historic stock market data? Or maybe just wanted to find out how much a hypothetical investment in the S&P 500 made between January 1871 and May 2009 would be worth after adjusting for inflation? Both with and without reinvesting dividends over all that time?

Today, we're putting all the S&P 500 data we have to work for you just so you can answer questions like these!

All you need to do is to select the dates you want to run your hypothetical investment between and to enter the amount of money to invest either from the very beginning or to add each month (beginning with that first month you select) for the duration that your investment runs. We'll determine how much your investment would be worth assuming the amounts invested are adjusted for inflation for each month the investment is active and accounting for the effects of either not reinvesting dividends along the way or fully reinvesting dividends.

Our other main assumptions are that all commissions, fees, and taxes are paid by our hypothetical investor either when money is invested or after money is withdrawn from the investment, where the tool provides an estimate of the investment value during the month you select for the end date. We'll also calculate the average annualized rate of return you would have earned if you had invested all the money you did from the very beginning and also the growth factor, which is a quick and easy way to see how much the amount you invested through time has grown!

Running some short-term numbers for fun, we find that if you started with $0.00 and invested $100.00 each month beginning in January 2009, the $200 you would have invested before selling in March 2009, when the S&P 500 hit bottom during the Great Recession, would have fallen in value to $182.29 for a growth factor of 0.91X, which corresponds to an annualized loss of over 42% if you had been reinvesting dividends.

But for real fun, see how much $1,000 invested in January 1871 would be worth in May 2009 - both with and without the effects of reinvesting dividends! We don't want to spoil the surprise, but there's a $102,895,170.93 difference! On the other hand, if you want to run a true-to-life worst case type scenario, set June 1932 as your ending date, since that month marks the bottom for stock prices during the Great Depression. If you want a best-case type scenario, set August 2000 as your end date, where that month marks the peak of the Dot-Com Bubble.

Update 26 December 2019: We have implemented some significant changes to this tool! The biggest change involves replacing the inflation-adjusted results the tool previously provided with nominal-only results that would match the actual amounts that would be accumulated for the historical investing scenarios you might consider, largely because nobody either invests or spends inflation-adjusted dollars. If however you're interested in those results, we have archived the previous edition of the tool where you can still use it as it appeared in its final incarnation.

Other changes we've implemented with this update provide more information about the performance of your hypothetical investment through time as you're seeking to build up its value. If you're on the opposite end of your investing lifepsan, please take advantage of our Cashing Out of the S&P 500 tool, which we introduced earlier in December 2019. Our thanks to all our readers who have provided suggestions and feedback!

We'll continue updating the tool monthly, approximately at the same time we update our S&P 500 At Your Fingertips tool, which is where you can access the historic data for the S&P 500 index value, as well as its earnings, dividends, and more.