The U.S. One-Dollar Coin (aka "The Golden Dollar")

The U.S. Treasury has spent many millions of U.S. dollars in developing, manufacturing and promoting the use of coins to replace the one-dollar bill in U.S. currency over the years. Invariably, Americans from nearly all quarters have rejected the Treasury Department's efforts to popularize first the one-dollar coin featuring Susan B. Anthony in 1979 (below, right), and now the so-called "Golden Dollar" which features a likeness of Sacajawea (shown above.) 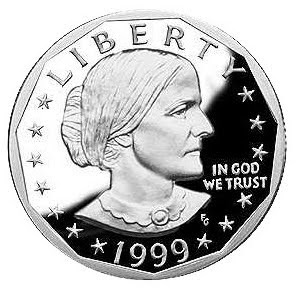 While the reasons for the failure of one-dollar coinage to gain acceptance by U.S. consumers for common use are predictably complex, a solution for the Treasury Department's dilemma may be at hand. Instead of foisting more coins issued by the U.S. Mint on the American consumer, perhaps they should adopt a new form of currency gaining popularity in Cameroon: the tops of beer bottles. The BBC reports on the trend (via the World Bank's Private Sector Development Blog):

Beer bottle caps are being used as currency in parts of Cameroon, which is in the grips of a promotion frenzy by rival breweries.

Intense competition between beer companies has seen 20 million bottles given away since the start of the year.

The prizes, which are revealed beneath the bottle top, include mobile phones, luxury cars and of course more beer.

With a beer costing $1, some punters are using their winning bottle tops to pay for taxi rides.

The bottle tops are being used for more that payment for transportation, as noted in the BBC article by Martin Etonge, a local journalist based in Cameroon's capital city of Yaounde:

"Taxi drivers are also using the caps in their fishy deals with the traffic police," adds Mr Etonge. "So they can get off by giving one or two caps to the officers."

Success in introducing a new form of currency into circulation is solely determined by the acceptance of the new money by the public. When the U.S. Treasury goes back to the drawing board to design the next one-dollar coin, they should perhaps take a moment to consider whether they ought to be offering another coin in the first place. At the very least, they should explore marketing relationships with Anheuser-Busch, Miller and other U.S. brewers!