A stunning example of bad math has recently been given attention by University of Chicago PhD candidate Ngan Dinh (HT: Cyberlibris.) Here is the anonymous mathematical proof that girls are evil: 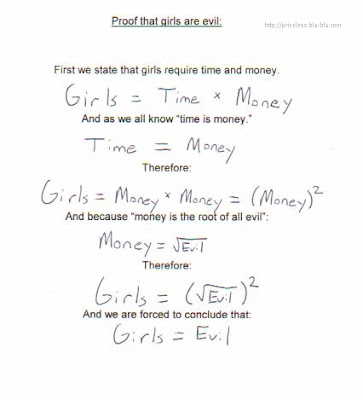 As the mathematically literate among Political Calculations' readers have already seen, the proof runs off the tracks in the second line, as the author states that girls require time *and* money, which suggests addition, but the author instead writes that Girls are the product of Time and Money. Multiplication instead of addition. No wonder that the final result, "Girls = Evil," is simply wrong.

Here's how the problem should have been solved:

First, we state that girls require time and money:

From which we conclude that Girls require twice as much money as you might otherwise think they do. Also, recognizing the equivalence of Time and Money, we also find that:

From which we may also conclude that Girls require twice as much time as well.

QED. Now we just need Steven Levitt (also of the University of Chicago) to back up the mathematical proof with some Freakonomics-style empirical evidence.