Every 10 years, the U.S. Census Bureau ventures out among the American public for the purpose of counting up just how many people there are running about the country. The changes in how the nation’s population is spread around the country drives changes in how the U.S. government operates – deciding things like how many representatives will come from each state as well as strongly influencing how federal tax dollars will be distributed.

The problem with the Census however, is that it’s only done every 10 years, and the accurate count of the U.S. population that the Census people put together is really only good for the year in which the Census is taken. For all the years between each Census, we have to make due with estimates of the total U.S. population.

In addition, Political Calculations has estimated the value for July 2005 (296,809,000) based on a simple projection of the Census Bureau’s estimated population figure for 2004, considering the average net change in the U.S. population as stated by the Census Bureau via the Population Clock. In the chart below, Political Calculations has also fit a trend line to the historic and estimated Census data, which suggests that the U.S. population is growing at an overall average annual rate of 1.26%: 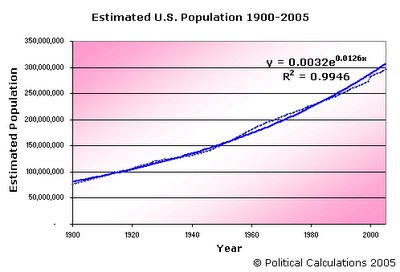 The match between Political Calculations’ fitted curve and actual and estimated data appears to be pretty good overall, but the actual Census data suggest that the Census Bureau might be having some problems with its assumptions in how it determines its estimated population totals. Looking at the period of the late 1990s, the U.S. Census’ estimates of total U.S. population fall well short of where the trend line would indicate, and also where the actual Census count said it was in 2000.

This shortfall becomes clear when you look at the jump that occurred at the 2000 Census, where the 1999 estimated population of 272,690,813 increased by nearly 10 million to the mid-year total population estimate of 282,192,162 in 2000 (this amount has been adjusted to reflect the official results of the 2000 Census which has the actual population count as of April, 2000.) By comparison, the typical annual change in U.S. population in recent years is a year-over-year increase of roughly 2.5 million people, which show how large a discrepancy the difference between the Census Bureau’s estimates and the actual count were in 2000.

Never-the-less, it wouldn’t be Political Calculations if we didn’t offer a tool based on our curve-fitting exercise. The following tool may be used to estimate the total U.S. population at mid-year for any year from 1900 to 2050, assuming the rate of growth continues at 1.26% each year:

Based on current demographic trends, it is likely that Political Calculations’ population estimating tool is overstating the growth rate of the U.S. population, but my bet is that it’s close enough to the real figures to still be useful. We only have to wait until 2010 to find out for sure!

Where the Numbers Come From