Craig Newmark of Newmark's Door recently pointed to the Labor Research Association's table outlining the overall decline of union membership in the United States since 1948. We here at Political Calculations thought that kind of data would be easier to show off as a chart: 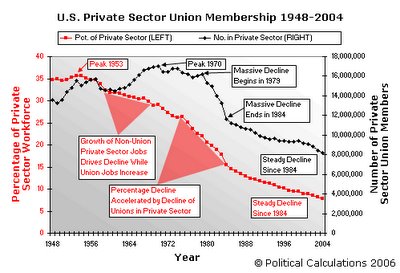 Periods Defining the Decline of Unions in the U.S.

1971-1978: The years between 1970 and 1979 mark the beginning of the decline of the total number of labor union member in the U.S. This period saw several major shocks to the U.S. economy - high inflation began taking root, the Arab oil embargo, and increased competition from foreign-based companies that was largely absent in the U.S. following the end of World War II. All of these factors combined in a kind of "perfect-storm" event to negatively impact industries where labor unions were strongly entrenched, most visibly in the U.S. domestic automotive industry.

1979-1984: The greatest period of decline for U.S. union membership occurred between 1979 and 1984, as the combination of high inflation and low economic growth that defined the Carter's administration's economic ineptitude were reversed by the Federal Reserve's tight money policies under Paul Volcker, which had the negative effect of creating a recession that accelerated the loss of union jobs in this period. The large scale losses of private sector union jobs continued until 1984 when, with inflation largely tamed, the Reagan administration's pro-growth economic policies fully took hold.

Since 1984: The overall decline in the number of private sector union members has largely stabilized at a near constant annual rate of decline of 1.7% since 1984, declining steadily from 11.6 million in 1984 to 8.2 million in 2004. The percentage of union members within the private sector has declined from 15.5% of the private sector labor force year in 1984 to just 7.9% in 2004. Here, the combination of faster economic growth of the non-unionized private sector in the U.S. along with the real decline of the unions throughout this period accounts for the ongoing trend toward less unionization in the most productive portion of the U.S. economy.