Political Calculations
Unexpectedly Intriguing!
23 March 2006
Who Votes Is Who Matters

Did you ever wonder why so many talking heads on television make a point of shooting down poll results related to political questions where the respondents aren't limited to the pool of registered voters?

Well, we didn't either here at Political Calculations, but thanks to research by the U.S. Census (available as a 592KB PDF document), we now know why: over 7 out of 8 registered voters vote (at least in the last big election in 2004)!

That compares to less than 6 out of 10 of the general population of the United States who are the legal voting age of 18 or older, and a bit more than 6 out of 10 who are also U.S. citizens. The following graph from the Census' study illustrates the actual percentages and numbers: 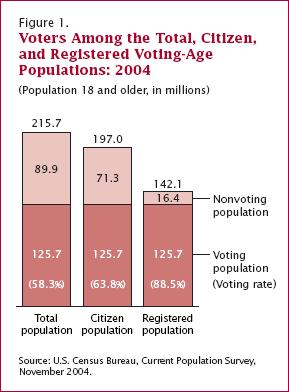 So, the next time you hear about a political poll whose results aren't exclusively collected by surveying the pool of registered voters in the U.S., remember that it probably isn't worth the dollar value of the electrons being transmitted to communicate its results!