Is the New York Times being rejected by its readers?

In New York City, at least, the answer appears to be "Yes." The following chart illustrates the declining importance of the newspaper's circulation in the 31-county area that makes up its home market, which has dropped from representing 64% of its total weekday circulation in 1993 to just 49% in 2005. Numerically speaking, the New York Times' circulation in the "Big Apple" has fallen some 27.1% from more than 757,000 in September 1993 to almost 553,000 in September 2005, according to data derived from the NY Times parent company's annual 10-K SEC filings: 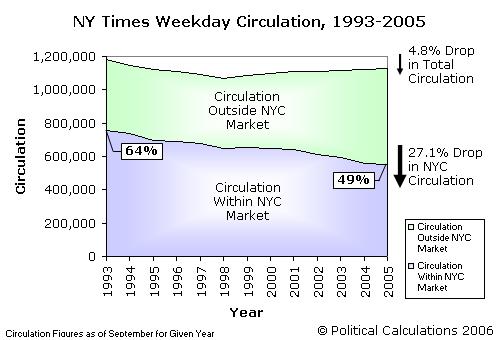 The chart also shows that the New York Times has been able to largely avoid the continuing decline in overall circulation being experienced by local newspapers across the United States, declining only 4.8% overall during this 15 year period. By contrast, the Los Angeles Times, the second largest daily newspaper in the U.S., has seen its circulation drop from 1,104,317 in 1993 to 843,432 in 2005 - a decline of 23.6%.

The New York Times has thus far avoided a fate similar to the Los Angeles Times through a concerted campaign that it launched in 1998 to focus upon becoming a national newspaper, rather than being the leading newspaper in the U.S.' largest city.

Interestingly, both the New York Times and the Los Angeles Times share a strong leftist editorial bias that has become much more stringent in the years from 1993 to the present day. One wonders how much of the erosion of each paper's local circulation may be due to their editorial board's growing contempt for opposing viewpoints held by a large percentage of the population in their home markets.

Thomas Lifson and Jack Risko provide a neat analysis of the state of the New York Times' business in All the Risk That's Fit to Disclose from March 2, 2006 in The American Thinker.