Not long ago, index fund pioneer John Bogle challenged Wharton business school professor Jeremy Siegel's claim that an index fund whose component stocks are weighted within the fund according to a fundamental business metric, such as revenues or dividends, would outperform a traditional market capitalization-weighted index. (HT: Greg Mankiw.)

The core of Bogle's argument is that the new investing strategy represented by the fundamentally-weighted indices is little more than the latest in a long series of investing fads, with a major knock against it - namely, higher expenses in the form of taxes and fees.

Leaving aside the "investing fad" argument, which only time can judge, a question we can better answer with the data on hand is this: "Will a fundamental-weighted index fund outperform a traditional market index enough to cover its additional costs?"

The oldest fundamental-weighted index fund is the RAFI 1000 index exchange traded fund, which trades under the symbol PRF. This ETF has been trading since December 2005 and offers the longest track record against traditional indices involving real money as opposed to historical data mining. (Note: WisdomTree, with whom Siegel is affiliated, has only been offering its own line-up of fundamental-weighted ETFs since June of this year, which doesn't really allow enough time to see how well its funds are performing.) The following chart shows the PRF's performance as of August 25, 2006 against the "big-three" stock market indices: the Dow Jones Industrials (DJI), the S&P 500 (GSPC, which which the ETF is most comparable), and the Nasdaq (IXIC): 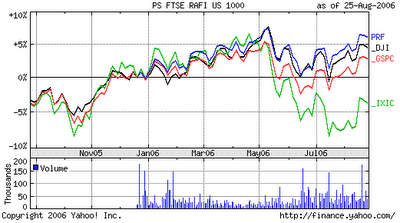 Is PRF's better performance over the time from when the ETF was launched on December 19, 2005 enough to cover its premium in costs compared to the traditional index funds?

In the chart above, we see that the fundamental-weighted PRF has outperformed the DJI by roughly 1.5-2.0%, the S&P 500 by roughly 3% and the Nasdaq by roughly 10%. All while demonstrating less volatility than these other indices.

The RAFI 1000 index is rebalanced annually, which means its costs from tax-based events (capital gains and losses from the stocks it sells) should be equivalent to those of the other major indices. It does however have a much higher expense ratio than that of a traditional index fund - 0.60% compared to 0.15% for a typical S&P 500 index fund. What this means is that PRF must outperform other indices by at least 0.45% to be able to cover these costs.

So far, it seems its performance is justifying its premium, as its returns are high enough to outweigh its higher costs. Not a bad start, but again, only time will tell if fundamental-weighted indexing turns out to be an investing fad.