Yesterday, Political Calculations looked at the value of U.S. imports and exports from January 1992 through June 2006, we noted that the U.S. trade deficit didn't begin significantly widening until mid-1997. Today, we thought we'd take a closer look to pin down exactly where it began.

The weakness of this approach is that it doesn't provide any real context to how significant a nation's trade deficit or surplus may be in terms of its trade. For example, a trade deficit of one-trillion dollars could either be really huge or really small, depending upon the actual volume of a nation's trade.

The real advantage of using this trade balance ratio is that the percentage values provide a good indication of to what degree a nation's trade is either in balance or out of balance. The greater the difference from 100%, the more unbalanced is that nation's trade.

So, that's what we did for U.S. trade data from January 1992 through June 2006. Our chart summarizing our results is below: 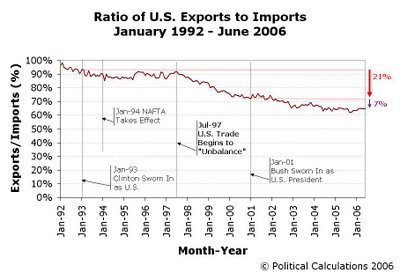 This chart clearly shows that the U.S. trade deficit was largely stable as a percentage of exports to imports during the first four and a half years of the Clinton administration (January 1993 - July 1997), but began rapidly widening thereafter. In fact the degree of the difference between these first four and half years (a one percentage point drop) to the Clinton administration's last three and a half years (an additional 20 percentage point drop) indicates that a significant change in how the U.S. government managed its trade policy during this time must have occurred.

The problem is, we can't find the smoking gun for such a sea change in U.S. trade policy that would coincide with this massive widening of the U.S. trade deficit. The most significant trade agreement of the Clinton administration, the North American Free Trade Agreement (NAFTA), took effect in January 1994, with little apparent effect on the U.S. trade balance. Meanwhile, the timeline of major trade agreements is silent during this period.

What did Bill Clinton do?