The Federal Reserve's Open Market Committee announced yesterday that they would be leaving the Federal Funds Rate unchanged at 5.25%.

Using Political Calculations' recession probability tool, which determines the odds that the U.S. economy will enter into a recession sometime in the next 12 months, we find that the current probability of recession in the U.S. is 43.4%. This figure is based on the current level of the Federal Funds Rate and the yields at market close of the 3-Month Treasury (4.98%) and the 10-Year Treasury (4.76%) on October 25, 2006.

We've also updated our chart that tracks the odds of recession since the Federal Reserve began it's most recent series of rate hikes: 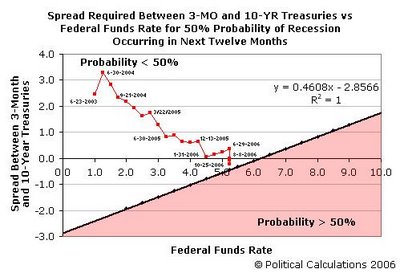 In other words, "Move along. Nothing to see here people", which more or less expresses the market's reaction to the Fed's announcement.