We've been intrigued by the concept of fundamental-weighted indexing since we first encountered it over a year ago. In a nutshell, a fundamental index will take measures such as revenues, cash flow, dividends, or other business performance data for a large number of publicly-traded companies and use them to decide how much of each stock of each company to include within the index. This method of weighting the components of a stock market index contrasts with the more common technique of weighting them within an index according to their relative market capitalization, as is done with major market indices like the S&P 500.

A recent article in Fortune magazine provides a really good rundown of the basics between the two:

The virtues of index investing are well known: low turnover, low cost, and you are sure to keep pace with the market. But there's one potential problem: The S&P 500 and other popular indexes are capitalization-weighted: Companies are represented based on their market value (share price times number of shares outstanding), so as stocks run up, so does their presence in the index. As a result, during times of market exuberance highflying stocks account for a disproportionate share of the index. The prime example came in the late 1990s. People who put money into an S&P 500 index fund in those years were getting a huge helping of wildly overvalued tech shares. They paid the price when the bubble burst.

To address that problem, Rob Arnott, chairman of Research Affiliates, an asset-management firm, set out to develop indexes that aren't linked to stock valuation. After testing various formulas using decades of U.S. and foreign stock market data, he found that indexes that weight companies based on a combination of sales, cash flow, book value, and dividends would almost always outperform traditional ones. His RAFI U.S. 1000, for example, would have earned an annualized average of 12.35% from 1962 through 2005, vs. 10.25% for the S&P 500; that means a hypothetical $1,000 invested in the RAFI index would have grown to $186,000, compared with $73,000 if invested in the S&P 500.

Since today marks the one-year anniversary of the launching of the PowerShares RAFI 1000 Exchange Traded Fund (Ticker: PRF), we thought we'd compare the performance of this ETF against the S&P 500: 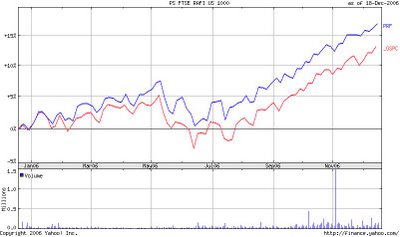 The Fortune article notes the difference between the expenses and turnover rates of the PRF ETF compared to the iShares Russell 1000 Value Index (Ticker: IWD):

The PowerShares RAFI 1000 fund, for example, has annual expenses of 0.6%, vs. 0.2% for the cap-weighted iShares Russell 1000 Value Index and annual turnover of 10%, vs. 7% for the iShares fund. Those differences are small, and to Arnott they're justified. "If price goes up and the fundamental scale of a company hasn't, we're going to be trimming it," he says. "And to my way of thinking that's good turnover. Why should we own twice as much [of a stock] just because the price has doubled?"

Here's a chart comparing the one-year performance of these two ETFs: 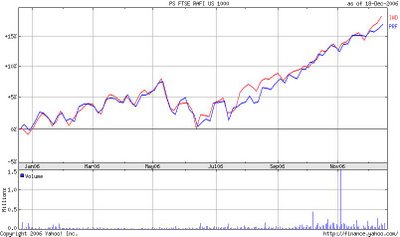 We see that right now, the iShares Russell 1000 Value Index is outperforming the PRF ETF, with an annualized rate of return of 21.38% compared to 17.23% - a 4.16% advantage (and an 8.21% advantage over the S&P 500.) We'll also note that these two investments do seem to track each other fairly closely, with one seeming to catch up to the other over time, indicating that more time would be required to tell which stock weighting method consistently outperforms the other, although the Russell 1000 Value Index does have an inherent cost advantage.

We'll close with one more quote from the Fortune article, which identifies why the fundamental-weighted indices would seem to outperform their market-capitalization weighted competition:

The secret seems to be simply that these fundamental indexes reduce the presence of overvalued stocks - the kind most susceptible to steep declines. Overall, the average P/E of stocks in the Russell 1000 is 17, compared with 15 for Arnott's RAFI U.S. 1000. 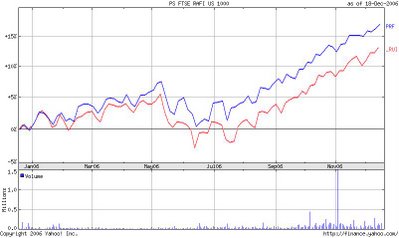 The Russell 1000 Index appears to slightly underperform the S&P 500 - its one year rate of return is 13.02%, just 0.15% below the return of the S&P 500. It would seem that the fundamental-weighted index so far outperforms the market capitalization weighted general stock market indices, justifying its higher expenses and turnover for this case, but perhaps not a market-cap weighted index of value stocks. More time, and perhaps historical backtesting, might be able to clarify which method is better over the long run.

Images will be fixed soon are fixed!...