Warren Meyer over at The Coyote Blog has been playing with the numbers from his annual Social Security report, and he isn't pleased with what he's estimated to be the effective rate of return on his "investment" in Social Security.

We thought that kind of math might make for a neat project, so we've gone to Social Security's actuarial notes and mined the data to create our tool below, which will approximate what Social Security estimates will be your rate of return on the amount of money you will pay into Social Security over your lifetime. That is, assuming they don't hike your taxes or slash your benefits!

Update 25 August 2011: Before you go any farther, we've made an updated version of this tool available, which incorporates Social Security's actuarial projections as of July 2010! If you're game, we suggest comparing your results here with those from the updated version!

If your birth year is before 1930, you can expect that your effective rate of return on your "investment" in Social Security is at the high end of the range presented above.

Otherwise, you should be pretty comfortably somewhere near the average approximate value!

In using the tool, you'll find that Single Males fare the worse, followed by Single Females and Two-Earner Couples, while One-Earner Couples come out with the best rate of return from their "investment" in Social Security.

These outcomes are largely driven by the difference in typical lifespans between men and women. For the typical One-Earner Couple, the household's income earner, usually male, dies much earlier than their spouse, who keeps receiving Social Security retirement benefits until they die. This advantage largely disappears if both members of the household work, which increases the amount of Social Security taxes paid without increasing the benefit received.

The Older The Better 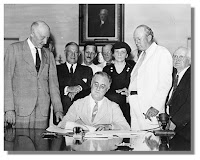 Going by birth year, you'll find that those born in recent decades don't come out anywhere near as well as those born back when the program was first launched in the 1930s. This is primarily a result of tax increases over the years, which have significantly reduced the effective rate of return of Social Security as an investment.

For example, when Social Security was first launched, the tax supporting it ran just 1% of a person's paycheck, with their employer required to match the contribution. Today, 6.4% of a person's paycheck goes to Social Security, again with their employer paying an additional 6.4% into the fund as well. Since benefits are more-or-less calculated using the same formula regardless of when an individual retires, the older worker, who has paid proportionally less into Social Security, comes out ahead of younger workers!

The Poorer the Better

If you play with the income numbers (which realistically fall between $0 and $97,000), you'll see that the lower income earners come out way ahead of high income earners. Social Security's benefits are designed to redistribute income in favor of those with low incomes.

Morbid? Maybe. But your Social Security "investment" isn't as without risk as many politicians would have you believe!