The Federal Reserve's Open Market Committee announced yesterday that they would be leaving the Federal Funds Rate unchanged at 5.25%.

Using Political Calculations' recession probability tool, which determines the odds that the U.S. economy will enter into a recession sometime in the next 12 months, we find that the current probability of recession in the U.S. is 41.4%. This figure is based on the current level of the Federal Funds Rate and the yields at market close of the 3-Month Treasury (4.94%) and the 10-Year Treasury (4.79%) on January 31, 2007.

We've also updated our chart that tracks the odds of recession since the Federal Reserve began it's most recent series of rate hikes. For the first time since March 2005, the probability of recession on the date that the FOMC has announced any potential changes in the Federal Funds Rate has substantially receded: 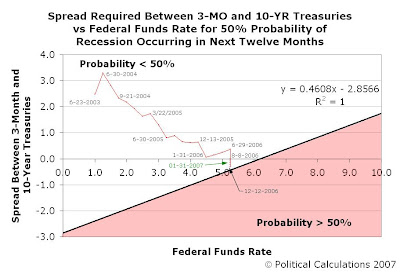 But, thanks to Paul Krugman, it now appears that 2007 will be largely recession proof!