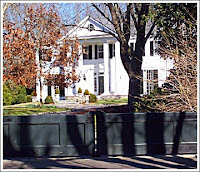 Recently, former US Vice President and 2006 Academy Award winner Al Gore ran into some flak for his and his family's mammoth energy consumption habits, which exceed the energy consumption levels of a typical U.S. family by a factor of 20.

In response, the environmental activist and former Presidential candidate's spokespeople pointed out that he purchases carbon offsets to compensate for the amount of carbon dioxide (CO2) that he is responsible for producing through the burning of fossil fuels to support the energy used in running his home.

Here's how the David Suzuki Foundation introduces the subject of carbon offsets:

A “carbon offset” is an emission reduction credit from another organization’s project that results in less carbon dioxide or other greenhouse gases in the atmosphere than would otherwise occur. Carbon offsets are typically measured in tons of CO2-equivalents (or 'CO2e') and are bought and sold through a number of international brokers, online retailers, and trading platforms.

Now, this seems like something that "environmentally-concerned" individuals or businesses might consider to balance their needs with those of the environment, but it wasn't until a sharp Protein Wisdom blog commenter named "skullberg" did the math that it would seem that the U.S. might be able to use this same technique to achieve on a national scale what environmental activists have long demanded: full compliance with the Kyoto Protocol! Better yet, we can now work out up front how much it will cost to comply with the terms of the Kyoto Treaty.

Well, we couldn't pass up that kind of math! Our latest tool lets you run the numbers for the US, or any other entity that produces millions of metric tons (MMT) of CO2, to find out how the carbon offsets bought may be used to reduce CO2 emissions. Just use the default numbers entered below (for the U.S., or enter your own) and you'll be on your way to making the world a greener place!

The default values for the Greenhouse Gas Emissions in the tool above were extracted from the Pew Center on Global Climate Research for 1990 to 2004 (the latter being the most current year for which data is available from this source.)

To figure the cost, we went to carbon offset vendor TerraPass' flight product price data and reverse engineered the math behind their pricing for carbon offsets. We found the relationship between pound of CO2 and price charged is effectively linear, with each pound of CO2 costing an additional $0.0033 on top of a flat base fee of $11.524. We did note that TerraPass seems to offer a discount for lower quantities of carbon dioxide to offset, with the cost of offsetting 1000 lb of CO2 costing just $9.95 when our formula indicates it should cost $14.852. For higher quantities of CO2, TerraPass' pricing fell pretty much right on a straight line that agreed with our formula. In the tool, we used a simple conversion to change Millions of Metric Tons of CO2 to pounds of CO2 to compute the cost.

Finally, we tossed in the value of the U.S. Federal Budget for 2007 to provide some perspective on what the real advantage of this technique is for achieving lower carbon emissions: it would make for a remarkably inexpensive line-item in the annual budget!

Our results: The U.S. can move to be in full compliance with the Kyoto Protocol for roughly $10.1 billion USD, or 0.36% of the 2007 U.S. Federal Budget! When you consider that the government already will spend $2 billion USD specifically to research global warming, just imagine the impact if the U.S. redirected this and other unproductive environmental research funding away from an endless series of inconclusive studies that never-the-less demand action to combat global warming to actually doing something about global warming. And no new taxes needed!

And now that you've seen the numbers, doesn't reducing the nation's greenhouse gas emissions using carbon offsets the official "Al Gore" way make a lot of sense? C'mon - let's all be like Al! You know you want to!