Political Calculations
Unexpectedly Intriguing!
May 9, 2007
Recession Watch: No Worries in 2007

2007 is shaping up to be a recession proof year, much as our interpretation of Paul Krugman's prediction of recession back in December of 2006 suggested it would be! Here's our latest update of our recession probability tracking chart: 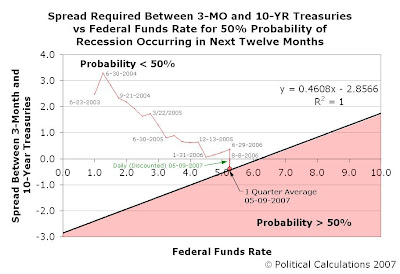 With today's action, or rather, non-action by the Federal Reserves' Open Market Committee, the Federal Funds Rate target remained at 5.25%. Using our recession probability tool, taking a 1-quarter rolling average of the daily closing values for the 3-month Treasury, the 10-year Treasury and the Federal Funds Rate, we find the current probability of recession occurring in the next year to be 49.3%. This probability represents a decline from the peak value of 50.1% that we saw from March 30 through April 2, 2007.

With the daily discounted yield rates for the 3-month and 10-year U.S. Treasuries having closed at 4.72% and 4.64% respectively, combined with the unchanged Federal Funds Rate of 5.25%, all these rates together produce a probability of recession occurring in the next 12 months of 39.3%. As the daily discounted Treasury yields lead the 1-quarter averaged values, this suggests that a recession is growing more and more unlikely for 2007.