Question: What is the probability that the United States will be in recession in the next 12 months? 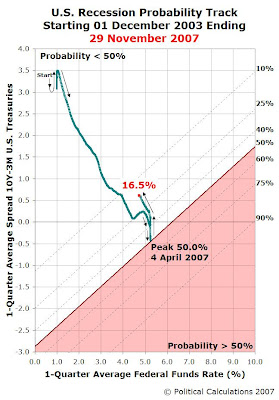 The most recent recession probability presented in the chart above is based upon the one-quarter trailing averages of the effective Federal Funds Rate and the spread between the 10-Year and 3-Month Constant Maturity U.S. Treasuries as of Thursday, November 29. Information about the method used to find the probability of recession, as well as a tool for doing the math, are available here!

The recession probability presented above is forward looking. The best early indication that the U.S. might already be in recession, at least as of the end the previous economic quarter, is James Hamilton and Marcelle Chauvet's Recession Probability Index. The probability that the U.S. economy was in recession at the end of the second quarter of 2007 is 9.5%.