Without realizing it until after the fact, we may very well have predicted last's week's economic turmoil in the U.S. a year ago.

To see that, let's turn to our chart showing the overall probability of recession as determined using our preferred method for calculating it, with the forecast probabilities matched to their applicable dates: 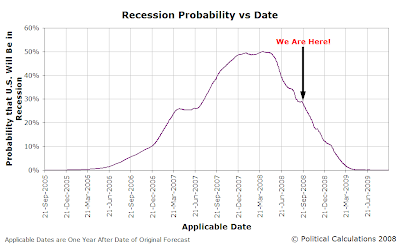 But, we see that the decline from the peak probability of recession has not been steady, at least in the portion of the chart representing the time since 31 August 2008. Here, unlike in previous weeks, the ongoing decline in the probability of recession was interrupted and began rising instead. The recession probability level then peaked on 16 September 2008, right in tune with the biggest crisis point of the past week!

It seems bizarrely disproportionate, with such a small uptick coinciding with such a large financial crisis. But, if we go back to the historic data recorded for the Federal Funds Rate and the 10-Year and 3-Month Treasuries for the one-quarter period from 19 June 2007 and 17 September 2007, from which the recession probability level was determined for 16 September 2008, we find that the U.S. Treasury yield curve re-inverted during a portion of that period, which accounts for the uptick.

So it's very possible that this method of predicting the probability of a U.S. recession anticipated last week's economic turmoil more than a year in advance.

Looking ahead, the probability of recession will steadily decline until mid-November, where from 13 November 2008 through 20 November 2008, another similar, but smaller, uptick occurs before the decline in probability levels resume.