Senator Ben Nelson (D) posted a spreadsheet giving the numbers of where spending would be going in the amendment he's cosponsoring with Senator Susan Collins (R) for the Senate version of the "stimulus" bill now making its way through the legislative process. The chart below shows where all that $780 billion (or so) would be going by government department: 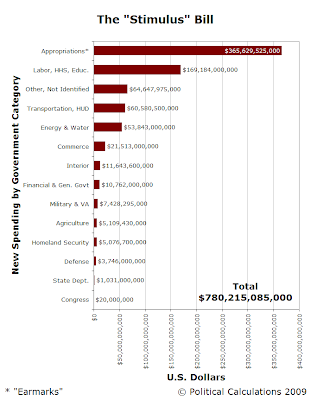 We thought it was funny that Congress saw fit to increase it's own budget by $20,000,000 to cover the salaries and expenses of adding "temporary" staffers. Kind of tells you what kind of oversight there's going to be of the $365 billion going out as "appropriations" (aka "earmarks", aka "pork"), the single biggest category of all the proposed new spending.

But then, the Congress has such a good track record in this area. What could possibly go wrong?...

Speaking of the "stimulus" bill, do see this: