One of the tools that we can use to measure the relative economic health of nations is to consider the rate of growth in the value of trade between them. We've been doing that periodically with the U.S. and China, having last established that China has fallen deeply into recession. 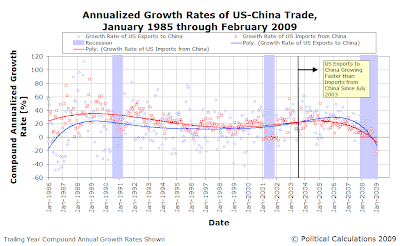 Today, with the latest release of trade data between the two countries by the U.S. Census Bureau, which updates the data through February 2009, we see the impact of China's recession. We'll begin by first looking at the rate of growth of exports from both the U.S to China and from China to the United States.

Here, we observe that the growth rate U.S. exports to China is no longer greater than the rate of China's exports to the U.S., with the best-fit curves indicating that China's rate of export growth to the U.S, while negative, has exceeded the U.S.' rate of export growth to China on average since roughly November 2008. We can also see the key driver behind the change - a massive sudden drop off in the growth rate of U.S. exports to China. 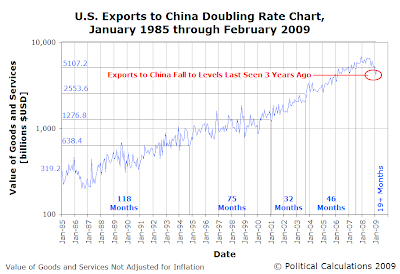 We can confirm this by looking at the recent plunge in U.S. expoerts to China with our doubling rate chart. This chart confirms that the value of U.S. exports to China has fallen to levels last seen some three years ago.

More than that, this chart also helps identify when the Chinese recession began as U.S. exports "topped out" to China roughly between June and August 2008. This period corresponds with the peak of the oil shock of 2007-08, which is the primary event that pushed the world into recession. We therefore believe the Chinese economy effectively entered into recession in August 2008. 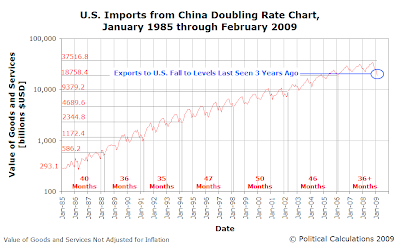 Likewise, our doubling rate chart for the value of China's exports to the United States also indicates that they have fallen to levels last seen some three years ago. The difference here is that Chinese exports to the U.S. follow a strong seasonal pattern, with the peak typically occurring in September-October of each year, ahead of the Christmas shopping season in the U.S. We observe the last peak in October 2008, consistent with that long-established pattern.

Where this pattern differs lies in the depths of the annual trough observed in the data, which typically occurs in February and March of each year. Here, we see that in the months of February and March of each year. These troughs confirm the U.S. recession as the trough for March 2008 falls below the level set in the preceding year, as well as a deeper recession in the U.S. in early 2009.

While that confirms the U.S. economic condition, the growing peaks from 2006 through 2008 suggest that Chinese exporters sought to sharply increase the level of their exports to the U.S. We believe that was the result of a strategy to extract the maximum value possible for their exported goods given the declining value of the U.S. dollar in late 2007 and expected to continue into 2008. We believe the sharp drop-off in exports marks the end of that strategy, as the accelerated supply of goods has simply shifted when their consumption might otherwise have occurred given the economic situation.

We believe this also accounts for the severity we observe in the drop-off of China's production of goods for export to the U.S.