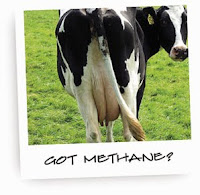 There are two groups of people to whom one should never ask the question posed in our post title today: vegetarians and environmentalists, mainly due to the consequences that will be unleashed by the moral superiority tsunami you're almost sure to experience if you provide either group of people with that kind of opening. (Just follow the links to each for examples of what you can reasonably expect....)

Instead, asking whether or not one should turn to vegetarianism to save the earth is best asked of just about anyone else. And as it happens, someone just did that, asking the question of Tim Harford through his "Dear Economist" column:

A growing trend among my fellow students is converting to vegetarianism for environmental reasons, citing statistics that meat production, in particular beef, is a tremendous cause of greenhouse gas emissions. I was wondering if you could provide some insight into the actual environmental cost of a steak. How does it compare to driving, or flying? Would a simple tax on beef production be much more efficient than vegetarianism?

Your friends are right to worry about beef; you are right to ask questions. Let’s start with the beef itself. Cows are ruminants, which means they produce large quantities of methane – contrary to what some people believe, much of this is emitted through the mouth. Methane is a powerful but transient greenhouse gas, so it is not straightforward to compare with carbon dioxide emissions, especially those produced by planes at altitude, which are more damaging.

Using a standard rule of thumb – and the work of “Economical Environmentalist“ Prashant Vaze – I can inform you that a 250g steak is responsible for more than 4kg of CO2-equivalent emissions, before cooking the stuff.

Sheep is just as bad; pork and chicken are half as bad; cod or wheat are at least eight times less carbon-intensive; potatoes and herring are far better still. Organic methods reduce carbon dioxide emissions, but not by much.

Yet this all looks modest relative to the costs of transport. Vaze reckons that steak’s emissions will get you about eight miles by plane, or 15 miles if you travel alone in a car.

As for the tax, it should be on all greenhouse gases, not just cow burps. I suspect it would create a few vegetarians, perhaps better diets for cows, and headaches for the taxman. More importantly, it would inspire some loft insulation. 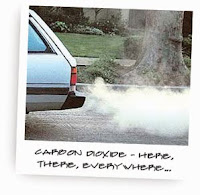 And now we'll add our two cents to the discussion. Now, this is not exactly new territory for us, in that we previously examined the environmental impact of buying local produce compared to having it shipped to your local supermarket from halfway around the world. But one thing we didn't do in that previous analysis was to consider how much carbon-based fuel and materials go into producing the Earth's transportation systems - we had only looked at how much fuel would be consumed in the actual transportation.

That's important because it turns out that many of the analyses done to compare the greenhouse-gas emissions figures for meat production with those used in transportation completely leave out that aspect, which is something that air quality expert Frank Mitloehner recently pointed out in a presentation to the 239th National Meeting of the American Chemical Society:

Mitloehner says confusion over meat and milk's role in climate change stems from a small section printed in the executive summary of a 2006 United Nations report, "Livestock's Long Shadow." It read: "The livestock sector is a major player, responsible for 18 percent of greenhouse gas emissions measured in CO2e (carbon dioxide equivalents). This is a higher share than transport."

Mitloehner says there is no doubt that livestock are major producers of methane, one of the greenhouse gases. But he faults the methodology of "Livestock's Long Shadow," contending that numbers for the livestock sector were calculated differently from transportation. In the report, the livestock emissions included gases produced by growing animal feed; animals' digestive emissions; and processing meat and milk into foods. But the transportation analysis factored in only emissions from fossil fuels burned while driving and not all other transport lifecycle related factors.

"This lopsided analysis is a classical apples-and-oranges analogy that truly confused the issue," he said.

How big are those transport lifecycle factors with respect to the environmental impact of livestock as measured by their greenhouse gas emissions? Mitloehner provides the apples-to-apples comparison for the United States:

Transportation creates an estimated 26 percent of all greenhouse gas emissions in the U.S., whereas raising cattle and pigs for food accounts for about 3 percent, he said.

Mitloehner also observes the likely unintended consequences of reducing meat and dairy production, while identifying where the world's focus on addressing the issues should be:

We'll close by pointing to The Armchair Economist Steven Landsburg's timeless explanation of why he isn't an environmentalist, which reaffirms nearly all the points we've made in this post!