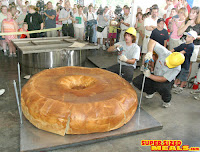 Our colleagues at NASA recently made news for a record achievement, although not in a good public relations way for the government space agency:

The nation's space agency paid the out-of-this-world price of $66 a person a day for bagels, cookies and juice at a conference, a new report found.

The subject of the NASA conference? It was a training session for its procurement officials - the people who do the buying with taxpayer funds.

During the three-day conference, the 317 attendees snacked on "light refreshments" of soda, coffee, fruit, bagels and cookies at a cost of $62,611, according to a NASA Inspector General report. That's $66 a day per person.

Fortunately, NASA is on top of it!

When asked why NASA spends so much on snacks, a NASA spokesman referred to the agency's response in the report, which didn't explain the costs but promised to do better. In that response, NASA deputy chief financial officer Terry Bowie defended the practice of buying snacks at conferences, saying it would keep attendees from wandering away. But Bowie said next month NASA will define "reasonable cost limits" for snacks at conferences.

That happened to be the topic of a session at the Baltimore conference - how to determine a reasonable price.

The government is in the very best of hands!

Image Credit: Super Sized Meals.com, which indicates that producing Bruegger's world-record holding bagel required 660 pounds of flour, 348 pounds of water, one-half pound of yeast, 53 pounds of malt and 12.5 pounds of salt. The giant bagel, nearly four thousand times larger than a "normal" Bruegger's bagel, was boiled for 30 minutes before being baked for nearly ten hours. The final product weighed 868 pounds, measuring some six feet in diameter, with a thickness of 20 inches.