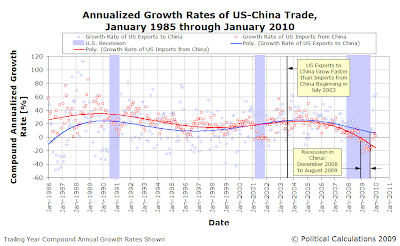 Applying our technique of using the growth of international trade to diagnose the relative economic health of nations, we find that the Chinese economy has strongly rebounded from the economic recession that began for it back in either November or December 2008. We also find it likely that the U.S. has exited its recession, which began in December 2007, at approximately the same time in the third quarter of 2009.

We see the evidence supporting these conclusions in our chart of the trailing year-over-year growth rate of each nation's exports to each other. Comparing each nation's economic recoveries with each others, we find that China's economy is growing much more strongly than the U.S. economy, which is reflected by the soaring year-over-year growth rate of U.S. exports to China following the bottoming of the Chinese recession in approximately August 2009.

We confirm these observations in our doubling rate charts showing the level of exports of each nation to the other.

Curiously then, in the face of such conditions already strongly favoring the fortunes of U.S. exporters, the Obama administration has focused its trade diplomacy upon the relationship between the Chinese renminbi and the U.S. dollar, pushing the Chinese government to act to reduce the relative value of the dollar with respect to the Chinese currency by increasing the value of the renminbi.

The policy would seem designed to boost the sluggish economic growth of the United States at the expense of the strongly growing Chinese economy, which is already boosting U.S. exporters without any such intervention thanks to its strong growth. It also suggests that the Obama administration does not have confidence that its economic policies can achieve higher rates of economic growth in the U.S. organically.