Resulting from bar fights, that is!...

Fighting after drinking in pubs in Britain has been found to cost over 2.5 million pounds to the British health care system as there are over 87,000 fights a year. The British Design Council enlisted a local design studio - DesignBridge - to make the glasses more difficult to smash and less dangerous to the victim. They've designed two prototypes, the Twin Wall and the Glass Plus.

We were skeptical at first, but we're really impressed with DesignBridge's efforts. First, here's their "Glass Plus" design, which takes already manufactured pint glasses and applies a thin layer of bio-resin to it to supply a higher degree of shatter resistance: 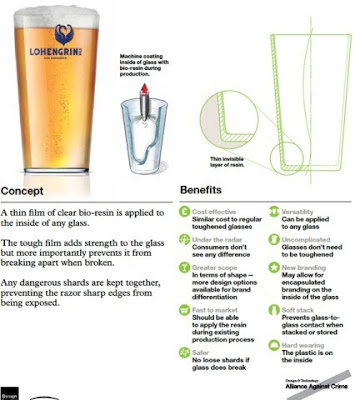 Sure, that sounds nice, but it's their other design concept that has really caught our imagination. It takes two very thin walled glasses, bonding one inside the other with a high strength resin, much the way automotive safety glass is produced. As a result, the pint glass provides better insulation, keeping the contents cooler than traditional materials. Better still, they've optimized the design of the interior glass wall for enhanced pourability, which means you can get your pint poured faster than you can with current pint glass technology! 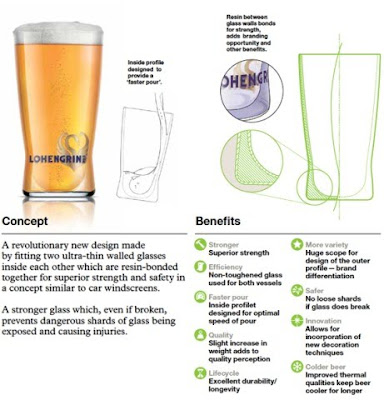 It might not reduce the incidence of bar fights in Britain, well, at all, but at least now, there's something cool to show for all 87,000 per year of them!